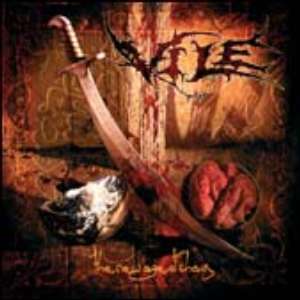 I have to say, I did not expect such a surprisingly flawless album from Vile, not because they weren’t good in the past, they were, it's just that this album is so damn…well, Flawless.

The band has perfected their brand of brutal yet precise American death metal, to sound like an amalgam of Morbid Angel, Decide, Emperor, and a big sign saying "Vile" on top.

The opening track, Devour, is a minute an a half sledgehammer to the frontal lobe, its fast, its accurate, it delivers one hell of a riff, and the drumming is clockwork-like, the deep growling sits on top and rounds things up really well.
The second track, Deafening Silence, brigs a bit more color and texture to the proceedings, its has some truly stellar riffing, some smart usage of the bass, and a strange, almost doom like riff at the end that culminates at a slow, melodic lead, that sits in well, even though it is not something you would expect here.

The title tack has a few Morbid Angel like riffing, with a sludge like quality, built eloquently around a solid vocal performance, again, some black metal influences, but they remain in some of the guitar work , apart from that, this is pure bred American death metal.

My favorite track is the next one, Suicide Warfare, with its driving guitar work, there's something abut it that makes all the different elements click, and it’s the one I would start brandishing my pit elbows for, this is a crowd pleaser if there ever was one.

To surmise, this is a certain classic in the passages of the great death metal book that constantly written, and when asked for this year's best death metal release, as of now, Vile have my vote.