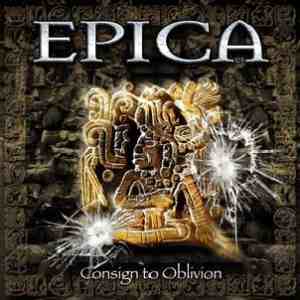 After a very sucssesful first album “The Phantom Agony” and a DVD that showed they can do it live just as well, Epica release a second studio album- Consign to Oblivion.
It shoots off with a classical theme “Huban K’u (A new Day Dawns- Prologue)” – an entire orchestra that makes me feel like a medival war is about to break.
This feeling changes right away, in the second track “Dance of Fate” which has such a tipical “Epica” sound to it strait out of ex-After Forever’s Mark Jensen.
The album is heavier than its predecessor- something which is well felt through Mark’s and Ad Sluijter’s guitar work as well as Mark’s growls and screams.
Yves Huts’s bass lines are better heard and therefore more felt, combined with Jeroen Simons’s drumming they create a much sharper and more consolidated sound.
The magical atmosphere is dictated by Coen Janssen )Keyboards).
All the above make the perfect base for vocalist Simone Simons which is sometimes escorted by a choir or Mark’s growls, like in “Force of the Shore”.
Another salient track is “Solitary Grounds”, already released as a single- it’s quiter than the rest of the songs in the album yet is exeptionaly exciting and presents the young vocalist’s voice in all its glory.
The 7th track “Quintus” starts with a medival melody which is soon consumed by the distortion and seemingly more interesting drumwork (compared to the rest of the tracks).
The 8th track, Mother of Light (A New Age Dawns- Part II), simply refuses to leave my mind. Therefore and due to the excellent vocal combination, overtaking riffs and powerfull drumming- it’s the best in the album.
I feel it’s important to mention Roy Sætre Khantatat (or simply Khan, vocalist of Kamelot) who contributes his voice for “Trois Vierges”, a duet ballad with quite keyboards and strings.
The album ends with with an epic track (9:45) carring the title of the album and being the third and last part of a concept unfolding through the 1st, 3rd and 8th tracks titled “A new Day Dawns”.
It looks like Epica has sucsseded releaseing a brilliant album once again, sticking to their distinctive sound and formula of metal plus female singer but still remaining original and innovative.