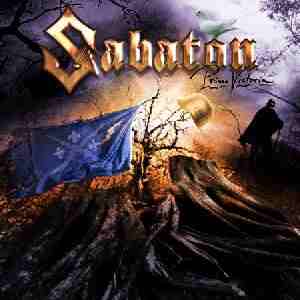 Some of you must have heard this album’s awesome opening track being played in various clubs due to its incredibly catchy chorus- “Primo Victoria” certainly opens up the appetite for more.
Sabaton was formed in 1999 and soon gained interest after releasing the “Fist for Fight” demo.
A year later, they went into the studio to record their debut album title “Metalizer”. The album’s release was delayed over and over – so two years later the (now furious) band members decided to re-enter recording a different album independently (without financial support from the Italian label they were signed in) titled “Primo Victoria”.
These Swedish guys make classic power/heavy metal with some mellow thrash influences and semi-progressive keyboard lines (such as the solo in the fifth track “Counterstrike”).
From the very first moment- the band’s galloping guitars conquer the listener’s attention.
Both guitarists, Oskar Montelius and Rickard Sundén, provide the needed company for Joakim Brodén’s coarse yet powerful voice.
The lyrics are about various wars and battles and a tribute to heavy metal classics in the last track “Metal Machine”; you won’t find sophisticated ideas and images – just plain old simple ones who go hand-in-hand with the music.
A fair demonstration of Daniel Mullback’s (drums) skills can by heard throughout the 2nd track “Reign of Terror” and the opening part of the 5th track “Counterstrike” (which reminds me of Judas Priest’s “Painkiller”) – though he’s an inseparatable part of the package called Sabaton.
Out of all musicians the ones who are often being overlooked are bass players, such as
Pär Sundström who completes the band’s simple and addictive sound.
Bottom line- “Primo Victoria” is a great album and an even better official catalyzer for this sweeping band’s future.