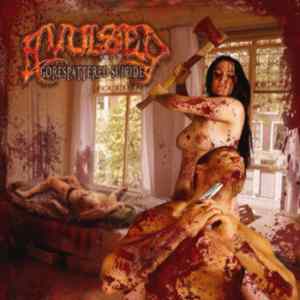 This is Avulsed fourth full length CD, and I'm shamed to say I've never really got a chance to listen to any of their prior releases.
That is a shame, since judsing from this , their new release, the band is a brutal death metal enthusiast's delight.
The Spanish band has been in existence for for more then ten years, creating brutal slabs of death metal, with this, their latest, hopefully getting the the media attention it so reightsly deserves.
Mastered and mixed by Hate Eternal's Eric Rutan, the album sounds every inch the brutal death metal release it is, low key, raw sounding death metal, with vocals growled in several monstrous tones.
From the opening title track, names such as Cannibal Corpse spring to mind, its fast, dirty, and extremely brutal sounding, vocals a low growl that stand in the middle of the mix, the band surprise by introducing a few melodic sounding riffs, and some really fine guitar solos, with the second track, Burnt But Not Carbonized showing off some truly unique riffing.
The cover is one of the more outrages ones I've seen, and it's actually a good description of the music the band does, harsh, brutal, and sick sounding, but does not prevent the album from sounding well-produced, professionally executed, and fun.
Last of the tack, is a very different sounding cover version of Motorhead's Ace Of Spades, which the band certainly make their own, even Lemmy doesn’t sound that raspy…
All in all, it’s a really good release, for those with the stomach for it.