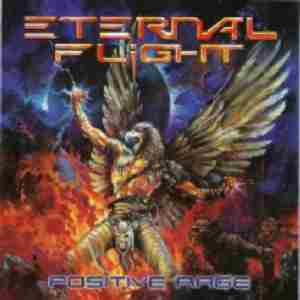 In one word – INCREDIBLE. You want me to sum up this album with a question? well, my question would have to be "where were you hiding until now"?. Eternal Flight play as if they were around here for the past two decades. Gerard Fois displays vocal qualities that no lead singer from any great European power metal band would have been ashamed of. You can find all that in a debut album of a French band, although France is not known for its progressive or power metal bands.
Keyboardist Sebstien Vibert brings a lot of energy and dynamic sounds that create that unique blend this band possesses, Nicolas Jeanpierre the bass player fits well in the melodic tunes that can be found all around this album. Alexandre Stellini the drummer brings it with melodic rhythms that blend well with the music, but when required he is not afraid to step it a notch, which is another unique quality of the band, the way she combines progressive metal, power metal and heavy metal in one package.
Not withstanding the immense talent the band members I mentioned possess, it is the other two members who complete the quintet that are worth mentioning with more details. Christophe Offredi the guitarist changes rhythms, plays some fine fast-pace solos as well as slower solos or heavy riffs, he can play melodies that would fit well with any rock ballad. A lot of talent on this lad. The other band member that is of a world class quality is the lead vocalist Gerard Fois. I already mentioned his vocal qualities but perhaps I failed to explain myself properly. This guy has the vocal qualities that can be compared to Rob Halford(Judas Priest), Kai Hansen(Gamma Ray) or Michael Kiske(Helloween). His voice flows along the lyrics so melodically, it's a real treat. He can soar to high tones whenever he's needed with no effort, and he can sing with perfect adjustment to the changing rhythm(his voice suits the power metal genre, but when heavy riffs come along his voice thickens into a heavy metal singer's voice). He can also sing touching ballads like Secret Place, which features in this album.
Bottom line, if I hadn't found out that Eternal Flight is French and that it was formed only around a year and half ago, I would have easily placed them alongside the magic five of German power metal(Gamma Ray-Helloween-Rage-Running Wild-Grave Digger). Positive Rage is an album to savour, it's really remarkable how a five minute track(minimum) can end so fast.