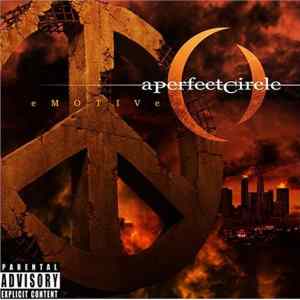 I don’t think you can actually stay totally calm when you are informed of a new perfect circle album, the normal reaction will be gallons of anticipation, or maybe a little moan of joy, but you can’t stay unmoved by it.

And then you are informed that the album will be full of cover versions to different songs from different eras and genres, from that point on, it is almost unrespectable to predict all the reactions that may follow this information. But on the other hand, would you actually doubt a band that gave us masterpieces such as Mar de noms and the less appreciated “The thirteen step”?

Maynard has decided to promote this album under the title of “ a collection of songs about war, peace, love and greed”. And then he chose songs from three decades of protesting music, mixed with few original material, read this and tell me you don’t feel the urge to give it a spin in your near by stereo?

The album opens up with a dark version of the song annihilation originally by “crucifix”, and now you know it’s dark, scary and full of surprises, and there’s no way back.


Among the rebirth hits you can find John Lennons imagine, What’s going on by Marvin gay which becomes a fearful cry for help song. When the levee breaks that broke through with the help of Led Zeppelin at the time but originally written by Memphis Minnies blues stomper, Deapche modes Peope are people and drum and fiddle by the legendary Johnny Mitchell.

So what have we got so far? A band who has proven itself musically more then once, and a collection of song which already we know are all very good, the originals at least, now pour it all into a big bowl and start mixing it ‘till it will have the same texture and you wouldn’t be able to tell apart. Now you know how it sounds.

A perfect circle has managed to deform those songs and make them their own, something which personally impress me much, they are all darker, colder and more meaningful at this time and age.
All the tracks have a new personality with a message that’s proven to be relavent to our days as much as they were 30 years ago.

So what you get, after all this mixing is a great surprising record for an unexpected direction, in an unexpected format.
Now all you’re left to do with it is eat and enjoy the meal infront of you.