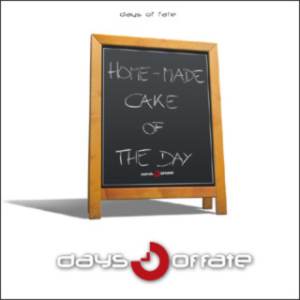 Days of fate - Home-made cake of the day - [Rabazco Records]

It’ hard not to get a British oriented feeling when you look at this album cover, a picture of a blackboard, with a white background , suddenly memories of early blur material comes to mind, by the way, the music sounds nothing like the album cover tells us.

The group “Days of Fate” were formed back 1993, and released their first album in 1998, they broke up shortly after it was released for interior problems and when the new millennium they were asked to contribute to a New Order tribute album, from that point on, the pressure to record new material began the effect, and they recorded a Maxi CD titled “Nervous Times” that turned to be a radio and club hit in no time.

The group is based in Germany but has a lot of classical Britpop influences especially noticeable in the leading vocals, the instrumental section Is much more close to the German club scene.

The album highlights are songs like Maybe, with a very 80s sound and a change of the tide in a ballad form bit, and the more ambient piece “Field of inspiration”.

The album should be a hit in the club scene, and is quite varied in the german music scene , it has a unique sound with the Britpop blend in that should definitely put this album in the musical spotlight.