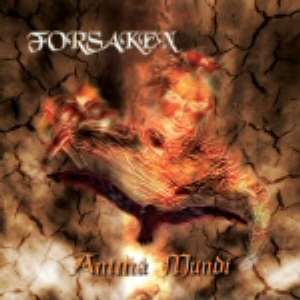 The passing of doom metal's goden age, somewhere back in the late eighties, is a truly sad event.
Such greats as Candlemass, Cathedral, and Solitude Aeturnus ruled the grey skies of that slow, mournful genre, and then abruptly died out, never to return,
We where treated to some fine albums from the likes of Memento Mori and Memory Garden, but these where rare and far between.
Forsaken mark the return of the genre, with all its gloomy glory, and they create an album which is instantly a classic.
Benefiting from a class A sound, the band is free to demonstrate their considerable talents, with their powerful and colorful vocalist being the icing on the cake.
Tracks range between a moderate 7 minutes, to the epic 11, and the true test of every doom band, is managing to maintain interest throughout such long songs, something that Forsaken do brilliantly.
The only respite in the flow of crushing, slow doom metal, is the middle track called The Poet's Nightmare, which sounds as if taken from a Cradle Of Filth album, a spoken passage with some atmospheric music, but the album's true peak lies within the epic The Eyes Of Prometheus, which truly demonstrate the wide range and diversity of their remarkable vocalist.
Guitar work is also top notch, with the rare, faster bits giving the songs some added strength, such as the ending of the second track, Sephiroth, a word taken from the mystic Cabbala.

Golden Lake, a small Scottish label is to be applauded for signing this relatively unknown band, hopefully, they will succeed in spearheading the return of doom metal into this bleak world.