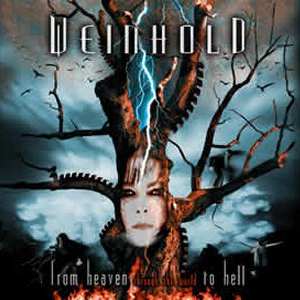 Weinhold - From Heaven Through The World To Hell - [Armageddon Music]

Jutta Weinhold is a veteran female metal vocalist, starting out in the legendary Velvet Viper, then moving into the ever dependable Zed Yago, immediately receiving praise for her strong, emotional vocal delivery.

Following the demise of her past bands, and after taking some well earned time off from the metal scene, Jutta is back with a bang with her latest offering, From Heaven Through The World To Hell.

The album benefits from a magnificent production, rich and well-textured, the amazing guitar work of Kai Reuter, and, of course, an over the top, all guns blazing vocal attack by Weinhold.

The album's lyrical content is varied, to say the least, from the epic Macbeth, telling that Shakespearian's character's tale, to the more hard rock like My Own Sister and Rock Of Metal.

Musically, this is a combination of old school hard rock, more evident in the latter half of the album, and progressive, vocally rich metal, in such tracks as Metamorphosis and Macbeth.

Definite stand out tracks are the opening, middle tempo metal with an eastern twist, and Macbeth, with its operatic vocals and orchestral richness.

A fine, varied album, let's hope this time Jutta is here to stay!