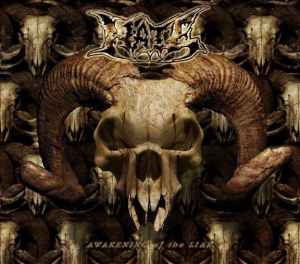 This is the 3rd album by blasphemous death metallers Hate, and though I knew their second album, I was not prepared for a death metal masterpiece of this magnitude.
The band creates fast and brutal death metal, yet highly technical and professional, their lyrics and concept are very much satanic in nature, as more common in black metal bands, yet musically they resemble such bands as Vader in their precision and sharpness of sound.
Straight off with the opening track, Flagellation its quite evident that these guys mean business, fast riffing, blast-beats, deep growled vocals, all accentuated by one of the best productions a death metal band could wish for,
The drummer is amazing, easily performing lightning fast double bass and hyper fast blast beats, just listen to his work on track two, impressive,
The guitar work is also top-notch, using smart riffs and melodic leads, such as the ones in tracks three and four,
A certain strongest point is hard to pinpoint at, the third track, Close To The Nephilim as one, its atmospheric middle section is brilliant, tracks six and seven are perfect death metal, the acoustic ninth track and brutal Spirit Of Gospa that follows it, it’s all good.

Some resemblance points can be drawn to Morbid Angel, some to Suffocation, but Hate deliver something which more than a sum of its parts, this is one of the best death metal albums I heard these last few years, and a must for all death metal fans out there.