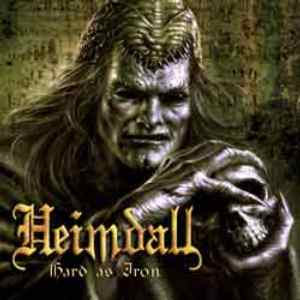 Any band that names an album after my favorite track off Judas Priest’s Ram It Down album deserves some respect, the fact that the band is one of the best Italian power metal bands around is another reason.
What Heimdall do is both similar and simultaneously dissimilar to other Italian melodic power metal bands, similar, since they too have strong medieval related lyrics and musical themes, as well as some classic elements and keyboards, dissimilar, since the vocalist isn’t the usual high-pitched screamer some power metal bands feel compelled to use, and since their music is somewhat heavier and rawer than others.
The sound is quite simple, basic sound, solid yet unassuming, nothing like the grandiose productions of Sacha Paeth and bands such as Rhapsody, it’s a bit rawer, and thus warmer, which is something I actually liked.
The title track is closer to heavy metal than to power, a good riff opens and accompanies the song, and the vocals are a definite strong point, operatic and aggressive at once, the band’s tendency for theatrical, operatic choruses and classical arrangements is evident, and their use of male choirs are executed perfectly.
The fifth track is a ballad of sorts, yet though ballads are usually my least favorite parts of power metal albums, this sees to work fine here, using some fine acoustic guitars and dramatic vocals.
The Emperor is one of my favorite tracks, displaying the band’s professionalism, again, using heavily theatric metal, but never descending into kitsch.
Black Heaven is another partly acoustic song, making use of more classical arrangements, it also works well, displaying the band’s diversity and range.
All in all this is quite a stand –out power metal album, elevating itself above your usual run-of-the-mill sword and sandal power metal, I really enjoyed it, and hopefully, you will too.