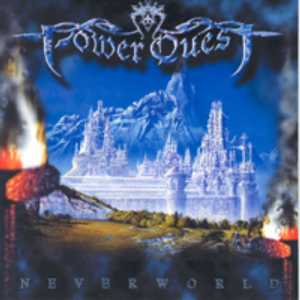 A British power metal band? Seems like a strange beast indeed, fellow countrymen Dragonheart are another such freak of nature, sadly, very few other exist.
Power Quest demonstrate that power metal can be done using heavy doses of keyboards, catchy choruses, and high-pitched vocals, while rarely sounding overly kitschy or dated.
The keyboards are the key player here, and Steve Williams has talent to spare, his playing is extremely fluid and imaginative, reminiscent of such keyboardists as Jens Johansson and Richard Anderson, the guitar work is also quite amazing, showcasing some truly stunning leads, the main fault here is, I think, the sound, the keyboards are well produced, but the overall sound comes off as a bit thin, the guitars and drums especially sound a bit low in the mix.
The title track is a 8 minute long epic masterpiece, starting off with some great keyboard lines, then going into a fast and furious melodic track, the vocals are quite high-pitched, but are done with such gusto and conviction that that actually work well,
Second track has a great chorus, catchy and melodic, the keyboards take center stage once more, and the track works well.
Edge Of time is an 80’s hard rock anthem; it benefits from some solid guitar work, and doesn’t seem out of place in the general context.
When I’m gone has some kitsch elements, and is probably my least favorite track, but the following tracks, especially Well Of Souls get things cooking again,
Combing some highly professional musicians and well written melodies, Power Quest have not invented the wheel, but they race their music fast enough for the album to be a winner, enjoy.