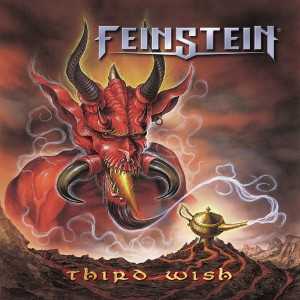 David “rock” Feinstein is a metal legend, yet somehow, many metalheads never heard of him.
It is quite a mystery, probably attributed to the fact that he has been the major force in two legendary bands that ceased to exist after a relatively short period of time, never reaching the heights to which they were entitled.
Guitarist and founding member of Dio’s first band, Elf, and bandleader of legendary US outfit, The Rods, David has been out of the music industry for several years, finally making a comeback with this, under the moniker of Feinstein, this is classic heavy metal at its loudest, greasiest, most muscle bound extremity, and it rocks.
Assembling a top-notch array of players, the only known one being John West, of Artension and Royal Hunt fame, band members are seasoned professionals, David himself being, of course, the main driving force.
Opening track Regeneration sets the tone here, 80’s flavored true metal, mid tempo, double bass laced drumming, crunchy guitars, and a strong, passion filled vocal delivery, this is a welcome throw back to the glory days of such albums as “Holy Diver” and “Sign Of The Hammer”.
Rebelation (pun intended) is another riff school book, benefiting from Fienstein’s solid production values, things warm up with the relatively fast “Streaming Star”, a great guitar riff and great vocal hooks make this one my favorite track on the album, though the title track is a serious contender,
The epic track, going through three tempo changes, starts of with a clean, melodic prologue, somewhat reminiscent of the classic “Children Of The Sea”, and shows Feinstein’s knack for simple, well built melodies,
Masquerade is another fine example, though the main riff sounds quite similar to Iron Maiden’s Two Minutes To Midnight,
Live to Ride, Ride To Live is a sure European hit, solid riff, catchy chorus, this is one for the history books, it doesn’t get more metal than this.

All in all, this is metal for metalheads, its only rock’n’roll, but I like it!