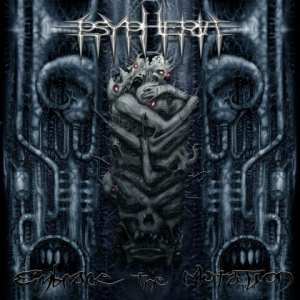 In the last few years, The Metal scene has been witnessing a growing oftenness of ambitous, pretentious attempts of producing revolutionary, ground-breaking creations; of fusing inner sub-genres or compeletely melting the boundaries of the Metal realms , reddefining the common idea of the genre, giving birth to previously unknown Extreme (or sadeningly mainstream) musical entities. Some notable examples of this fashion would be the famous recent works of bands as Mayhem, Arcturus, or Satyricon, each generating the primal ripple to a new potential current in the vast seas of diverse Metal fashions, as well as noumerous less regarded still as innitiative efforts, of which a few examples would be works by bands as Lux Occulta, Fleurety, In the woods, or Bethlehem, not to mention the horrifiying migration of Gothic metal bands to the Goth-Electro-Pop fields. And this being only the tip of the iceberg.

The above mentioned process has created an interesting dichotomous phenomenon: the supporters of progress and innovation express an increasing demand new overwhelming, unique releases. Neverthelss, this movements raises a contrasting form the clamor from the “old-school” Metal fans, demanding an opposing revival of the traditional Metal legacy. In the midst of these two opposite pollars, remain hanged the conventional, mid-era influenced bands, a bit overlooked and ignored. Noticing and analysing the current demand among the fans, they are sometimes forced to providing the requested goods, although not always properly fit to achieve this goal.

Psypheria seems to be a good example of this situation.

Yet the band, making an effort of innovating and renewing the genre, makes an attempt of combining Symphonic elements in their music. Employing an extremley dominant keyboard player, each of their compositions includes varied keyboard lines, alternately applying Gothic-like atmospheres, and more theatrical chromatic dissonant melodic lines. Unfortunately, In this domain, the bands success is rather limited. Usually, the keyboard part don’t fit well to the Brutal Death sorruondings, sounding a bit forced and unnatural, not to say artificial. Even in the few parts when the combination succeeds, the success remains limited to the aesthetic boundaries only, never truly penetraing the essence and spirit of the music, being more of an aesthetical adaptation than a result of a true synthetical creative process.

Nevertheless, let me repeat my statement once again: Psypheria is not a bad band. They are by all means good in several fields . Their partial-failure is derived of the current boisterous Metal scene, barely allowing any intermediate-styled band to reach the headlines, tempting the bands of this fashion to embark on adventuruos, unripe experiments. Still, this album is recommended to fans of the genre, as well as to fanatic documenters of experimental Metal music.