why did you choose the name necro and whats your real name? if its o.k to tell us?
my name is Ron, and I got the necro name from slayer, it was necrophiliac at first, people started calling me Necro for short so it stuck

What music did you listen when you were a kid?
I listed to mostly metal and hiphop, but before that I used to rock hall and oates, I was a huge hall and oates fan as a kid

Who was your ideal musician when you were a kid and who is today?
I always been a huge fan of Metallica, James Hetfield was and is one of my biggest influences, the complex guitar riffs and time changes and dexterity need to play a metallica song always impressed me.

Growing up as a jewish kid had any impact on your childhood?
Yeah I guess, people never really liked jewish people, but I didnt have to deal with nazis much, there was always jews around, all cultures, brooklyn is pretty much mixed with everyone

Did the fact that you are jewish have an impact on you as a musician?
I dont know, not sure, probably in some way, cant think directly how it has effected me, I don't think music has anything to do with religion, its in the heart and all humans have or dont have heart regardless of culture.

How did you come accross rap and metal music and what bands inspire you the most?
As a kid it was all over the projects and my brother always had shit in the crib so it was there, i'm more influenced from bill than even my own parents musically, they werent into much, but my mom did rock disco and soul and my mother rocked Israeli shit and one period of time he was buggin and had a country music fetish, he must have been sniffing mad coke. 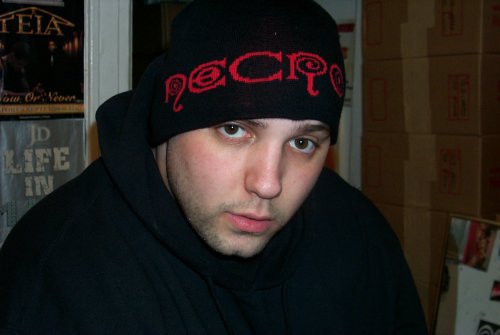 Your album sound more rap then metal ,is that your prefered choice of music?
I love it all, for me its all about new experiences musically and experimenting so I have only begun to try new things, I enjoy creating ill shit, anything I touch will be heroin regardless of what fusion because I love old shit and all the dust and I know how to impress myself, i look to make music I feel, I guess most people do but I feel im different mentally, always been so my shit will be different always.

How did you connect with the guest artists on the album ,please tell us in depth about the creative concept?
Just friends conecting with friends, in the end its all about the fact that I am fans of these guys and i do my shit well and i know my metal facts and history so i can talk it as well as walk it, i ain't posing like alot of people, the creative process is real natural, i just do it, like molding clay until you create what u want, i just experiment and make sure i never release anything wack.


What do your lyrics talk about?
Death, sex, violence, anger, life, the world...

Do you have a specific statement that you want to pass on to your listeners?
Sure, that im not having it, that im a rebel, that i dont fuck around in real life, to hustle, to get yours, to never take shit from anyone, to have fun, to enjoy sex, to be creative, to be original, my music is a movement, its an energy, that tingle down ya spine.

What bands do you admire today?
Not many, I don't see much that impresses me, I'm old school, even though to young kids I'm the dopest new shit on earth, I love old shit, I listen to Curtis Mayfield lately.

How do you see the rap / metal movment in the world today? do you like what you see?
I like my shit, I dont see anyone else doing what i do, nobody can, if you mean that rap rock shit, i don't see much of it out and most of it sucks, metal dudes trying to rap aint a good look, they dont got it, they dont understand true hiphop like i do, they think they do, but they r fooling themselves, people think cuz they r fans of some shit they can do it, thats disrespectful.

Which bands you think are underrated and need more attention?
I dont know and dont care to answert this question, Necro is underrated, I need all females that are sexy, their attention to my ballsac.

At the end of the 80's and in the begining of the 90's there was a bit of antisemic movments in rap music - do you still see that happen today? or its something that passed away?
People hate jews and whites, whatever, most of these dudes are fake, I met alot of them in person and they kissed my ass, in the streets you're either real or fake, color don't matter alot of the time, cuz you could get fucked up over some real shit, by anyone of any color, but in the business you got 99% pussies so they try to hate, fuck anyone that is racist, you know who you are.

Have you been in israel? are you planing to visit there?
Sure I will go there someday, we will see.

How close are you to religeon?
Well my mother is religious and I am very close to her so.... I'm not a religious person but I have my own relationship with god, we have an understanding.

Please tell us more about your album including all the details(prefix, cot).
My album the prefix for death is the brutalest record on the earth in the Hiphop genre, total ruckus, circle of tyrants is another fucked up rugged album, I suggest you all buy these records if you want the most rugged shit on earth, look up another interview where I explain these records cuz im too lazy to write it out here now. :)
nah im kidding, I just don't wanna be redundant, I got metal legends all over these albums and if you like Hiphop and Metal - I suggest you cop all these joints.
Peace to Israel.

thanks,
check:
My website - NecroHipHop.com
My Necro MySpace page


Thank you for your time,
Maor Appelbaum
Share |
blog comments powered by Disqus