President Evil is one of the uprising bands in the German metal scene with their blend of badass thrash, vibrant stoner and punk-like suite.
I’ve had the chance to interview their guitarist, James Lars, about their new album “The Trash ‘n Roll Asshole show” and a bunch of other things.

First of all, how did you guys get started as a band?
President Evil started as a side project. We played in different local bands but we were not satisfied with the Rock’n roll level in that stuff. So the idea came up to start a new band with this configuration on guys and with the highest possible level of Rock’n roll. Some time passed by but the day came for us to start - so we started. Now here we are.

Where did you come up with your name?
We needed a name for our 1st gig, we did not think too much about it. It was an idea of our singer diva Johnny Holze... One day he wrote an SMS with the content. That was it –fits to the sound and meaning of our style. And our answer was yes. 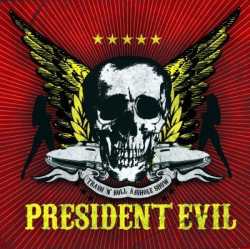 Tell us about your new album, “The Trash ‘n Roll Asshole show”; what was the work process on it? How was does it feel to record a first full length album?
Funny! We never thought about making a record or a demo. We’ve started with the rehearsals and the songs came one after another. Without any thought about how it should sound or which style we wanna play. The results are songs from our hearts. They represent what we feel and how we live. No head - just heart.
The whole material was finished and played live before we went to the recording.
What feels right is right for us.

You performed many live shows with Betzefer and Koroded lately – what was touring with them like?
They are very great guys. It was a fucking great pleasure to meet and share the bus, stage and part of our lives with them. They are real musicians and we learned a lot from them. Not only about music, but about Israel Rock’n roll lifestyle :).

Will you consider performing with them (or without them) here in Israel?
If we got the chance to do it, we’ll do it for sure. We spoke about it on tour and we hope we’ll make it true.

You’ll support thrash metal giants Exodus soon – what are your expectations and how did you get the gig?
A friend of us knows the promoter and invited him to one gig of the tour. He looked for support. He liked the show and free beer. So he invited us to warm the people up for Exodus and empty some beers with them. I realized during this interview that we haven’t too much expectation at all; we’ll see what will come and do our best every time. We just hope that the fans of Exodus will give us a real chance to invite them to the trash´n roll asshole show.

You’ll also support the legendary Ministry this summer for a tour, how does it feel to know pretty soon you’ll be sharing a stage with the likes of Al Jourgensen, Paul Raven and Joey Jordison?
What should I say; we need some big balls to get through this. It’s an honor to support these guys in Europe; the same guys we were looking up to for years. I guess we’ll realize it when it happens.

What do you think about Ministry’s “Rio Grande Blood”?
Back to the roots. It bits, scratching your ears and the power knocks you out. Like the psalm 69 album.

What bands/albums are you currently listening to?
German band called Harmful , some old Tom Waits stuff, Refused and the “Independent” from Sacred Reich. Also both Down and Queens Of The Stone Age.

Regarding your signing with AFM records, which is mostly a power/heavy metal focused label, what made you sign with them? How did it happen?
First of all they got a very good reputation. They are really supporting their bands.
After a gig on the Dong Open Air in Germany they contacted us and said they saw us live and were impressed. We gave them our recording stuff and they liked it too. Some mails later we met at a concert and we made them drunk with Jägermeister kirsch and convinced them that we are the best band in the world.
Would you not sign the best band in the world? So we got the deal :) 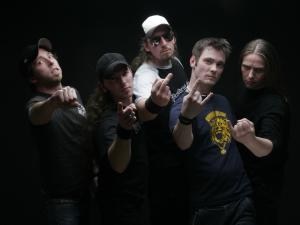 How would you define your music?
Sounds like stoner-thrash. Some thrash metal, some Stoner, some Punk and Rock’n roll.
Straight, no - I show you how great a guitarplayer I am- groovy, some melody and not so serious at all, just one guy screaming against it all.

Which bands would you say influenced you the most?
I saw Down recently and realized that they influenced us most. Other bands are:
Anthrax, Pantera, Sacred Reich, Slayer, Kyuss, Fu Manchu, Slime, R.A.T.M, Refused and a thousand more…

You’ve done quite a lot in a short period of time as a band, where do you see yourselves in 5 years?
We don’t think too much about the future. We try to enjoy what we do now. Maybe tomorrow all the people would say “hey, they suck”. If the speed won’t slow down and we support Ministry this year, wow, I guess we will be some lucky rockstar assholes in 5 years.

With which band/s would you like to perform with? Is there a dream band you wish to perform with?
Ministry is one dream, Anthrax and like every Rock´n Roll guy, and with Motörhead.

Do you think you’ll be doing music for the rest of your life or are you considering/planning to study anything else?
I’ve been making music for nearly 18 years. I’ve finished studying for 5 years and I work. No reason to give up making music. Maybe if I’m an old dad I’ll prefer to sit on a barstool with a jar of whiskey and play the blues. But I’m a music-junky and if you’re addicted you can’t do without it.

How is the metal scene there?
There is no real music-scene in Bremen. We got some friends and some foes - Half and half. Some are a little bit jealous. We try to change it but most bands are only doing it for themselves. No good base for a network. So everything is normal in the north. Coldhearted, man...

Recently many artists express their opinions on the bush administration, what is your opinion about his administration?
He sucks. The most powerful man in the world has a big lack of human heart and intellect. Dangerous!!!

What do you think about the picture of Angela Merkel’s (German chancellor) Ass?
I haven’t seen it and there’s nothing I miss.

And finally, what message would you like to send out?
You’re all welcome to the trash´n roll asshole show... Hopefully in Israel with Koroded and Betzefer.


I’d like to thank James for doing the interview (especially since we had to re-do it) and wish the band all the best in the future.