Remembrance
Interview with: Remembrance is an upcoming Funeral Doom metal act, crawling from France, with a debut album called “Frail Vision” which got very well accepted in the doom metal community and the metal community as a whole. The act is actually a duo, compiled from Matthieu Sachs (lead and rhythm guitars, vocals, bass) and Carline Van Roos (keyboards, drums, additional guitars, female vocals) which I’ve had the chance to have a two on one interview with.
2006-04-20 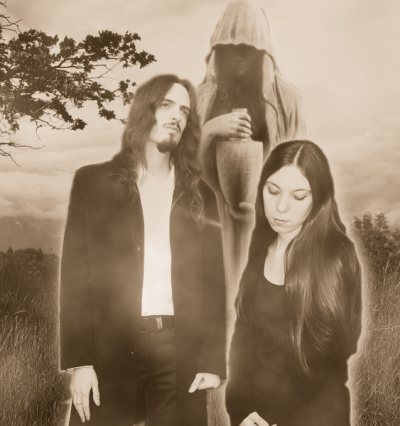 First of all, can you introduce Remembrance to those who might not know you?
Carline: Remembrance is a funeral doom band from France formed in 2004. We try to express depressive and atmospheric music using desperate slow orchestrations as well as some moments of fast raging guitars.

The genre of music Remembrance is included in is a stream of Doom metal, called Funeral Doom, did you intend for it to be this way or did it just happen?
Carline: We love creating sad music; we wanted to start a project more extreme and darker than our other band, Lethian Dreams which is more ethereal/atmospheric. We didn’t intend to make “funeral doom”, we wanted to express the music we feel.

Your debut album, "Frail Visions", has been accepted in the doom community with open arms – what kind of feedback did you personally get on it?
Carline: we received very good feedback indeed; a lot of support from people, from bands.. I wasn’t expecting for it so it is really great.

Still remaining on the issue of your debut- what was the process of making it like? What was the "work distribution" between you two?
Carline: The very first Remembrance’s song – “Beyond the Waters” (first version), was completely done by Matthieu. Then he asked me to join Remembrance, and we recorded a second version of the song, which features on the Asymmetry compilation.
The process of composing our album was different, I first came with the keyboard parts and then Matthieu added guitars and I also added some if needed.

Matthieu: When I started Remembrance, I wanted the process of composing different than in Lethian Dreams; I wanted the melodies to be mostly based on the keyboard while in Lethian Dreams the keyboard is more in the background and the melodies are carried by the lead guitar and the female voice. That’s why it was important to compose the keyboard first.
As I’m no keyboardist, I only managed to compose the keyboard for one song; I needed Carline to help me with the keyboard and so she joined Remembrance.
Carline and I are also very complementary with the guitars; we both have our own way of playing and when combined, it gives a very good result.
The last song of the album, “Where all has been wasted”, was composed in a different manner, we both composed the guitars at the same time and then Carline added the keyboard; I think it’s quite noticeable as on that song the keyboard doesn’t play the main melody, but still it fits really well with Remembrance’s other songs and a lot of people seem to like this song.

When I listen to your music I get images and scenes in my head, I was wondering if you wrote the music out of scenes/images in your mind that you tried to translate into music or was there a different source of inspiration and process of writing?
Carline: I try to translate the emotions I have inside, try to describe some experiences, to gather my feelings in the music.

Matthieu: I also like to imagine pictures while listening to music, but I don't compose from pics or scenes I have in mind ; I simply try to translate emotions and feelings in our music.
Sometimes I don’t compose out of emotions, but I create emotions. I mean I don’t translate emotions I have in mind while I’m composing, sometimes I have nothing in mind while I’m playing the guitars, but I like sad and emotional music, so I play something I like and then it makes me feel something.
I wouldn’t be satisfied with our music if it doesn’t make me feel something. That’s why when I record the vocals at last, I’m in total harmony with our music, ‘cause we managed to create something which fills me with emotions and those emotions are obvious in the voice.
For example, the vocals on the middle part of “Murdering My Faith” are utterly desperate, the result is perfect.

Your lyrics are quite depressive and grim- where does it all come from?
Carline: The lyrics are mostly inspired by own experiences and feelings… they talk about sorrow, regrets, disappointment, frailty, solitude, doubts… They express what I feel or what I felt at different moments.


I've read you're trying to complete needed members in order to perform live, is there any progress in that area?
Matthieu: We tried few rehearsals with friends of us, from the doom band "Lux Incerta" ; but unfortunately it was too difficult to schedule the rehearsals as they don't live very close to us. I think we will try again; in rehearsals we had the opportunity to check out how our songs would sound live and it would really be a blast; let's hope Remembrance will be able to perform live in the future.

Are you working on any new material?
Matthieu: We have recorded few ideas so far ; but we are far from finishing our second album ; for now we are mostly focusing on our other band, Lethian Dreams. We have been working on Lethian Dreams’ debut album for a while and we hope to finish and release it in 2006.

What can you say about the upcoming 'Lethian Dreams" album due later this year?
We are still working on it; we still have 1 song to record; then we will have to get the CD mastered in studio and to contact labels. I think it should be released later this year. Some premix versions are already available on our website.

Are you involved in any other projects?
Carline: I’m involved in ‘Dahlia’s Tear’, which is the side-project of Anil Emre Dedeoglu from the doom metal band ‘Dimness Through Infinity’.
I made vocals for one songs of the album. Dahlia’s Tear is something very different from what I do normally in music, as it is ambient music. I like a lot the atmosphere Anil created in his project and I hope I’ll be working again with him in the future.

Your music is often compared to that of "Shape of Despair", what do you think about this comparison?
Carline: I’m very glad of the comparison; Shape of Despair is an amazing band… “Shades Of…” and “Angels of Distress” are masterpieces

Matthieu: It is very flattering to be compared with Shape of Despair as I'm a big fan of their music. Actually I was the first to compare our music to the one of Shape of Despair when I announced the creation of Remembrance on doom-metal.com forum; so I totally agree with this comparison. I think Remembrance is a little different from Shape of Despair though; we use some mid-tempo parts while Shape Of Despair songs are very slow.

Who are your role models/ bands that influence you the most?
Carline: I listen to a lot of different music genres so I think I’m influenced by a bit of everything I listen to.. But Anathema, Shape of Despair, Rapture, Saturnus definitely have an influence.

List of albums you listen to lately?
Matthieu: “Of the Wand and the Moon – Emptiness Emptiness Emptiness” and “Pantheist – The pains of sleep” are the 2 last albums I recently discovered and listen to a lot. And apart from those recent albums, I also listen a lot to albums from my favorite bands: Paradise Lost, Shape Of Despair, Saturnus etc

How did you get to sign with the Israeli label TotalRust Music?
They first offered us to feature on a compilation on which they were working. When we released our demo "Among Lost Illusions", they contacted us again and asked if we were interested in releasing our debut album through TotalRust Music. We accepted it at once, it was a honour for us to release our debut album through TotalRust music and to be, at the same time, their first signing.

Is there any dream goal you'd like to achieve regarding Remembrance?
Matthieu: touring with bands of which we are fans

Carline: yes, playing live would be great, definitely one of my goals...And I’m also impatient to record our second album

What do your family members think about your music and the place it takes in your life?
Matthieu: I don't really know their opinions, I think they prefer Lethian Dreams than Remembrance because it less extreme.
They are aware that music is our passion, but I don't know if they figure out how much time and money we can invest in music.

Carline: My family knows how much music is important for me, but I’m not sure about what they think of our bands..

Other than music, do you have any occupations?
Matthieu: Reading or watching movies, most of the time dealing with an imaginary world like Tolkien’s books. I also like design, even if I’m not really good at it, and web-programming, which is also my current job.

Carline: I don’t watch many movies and I don’t read much either…music is my main occupation, what I enjoy the most.

How does being a musician integrate with your other occupations? How much of your time is put to your band duties and what is your priority?
Matthieu: Music is our priority and first occupation; I’m not saying we spend all the time composing, but the bands in general take a lot of time. Carline promotes the band and manages our myspace accounts; I’m in charge of our official websites and a part of the design. When we are not playing music, we always have music in mind, what we could do to improve a song or which material should we buy to get a better sound. Apart from composing and promoting the band, we spend a lot of time listening to music.

What is your opinion on religion and spiritualism?
Matthieu: I haven’t really an opinion about it, in fact I’ve never really thought about it.
I’m not religious, and about spiritualism, I think those things are beyond understanding.
I find it difficult to believe in something, but still it’s even more difficult to believe life and humanity is the result of nothing.

Your music is very eerie, dark and depressive- What is the meaning of life?
Matthieu: I think I’ll sound bitter telling my opinion about it, I think life is working hard from childhood to retirement, doing things you don’t like to get the right to live. At the end of your life you look back and see you’ve done nothing. The stupid thing is that, even if I’m bitter about it, I like life.

How involved are you in each other's life?
Matthieu : We are very complementary in our way of thinking and in our music…

Quotation you like the most?
Matthieu : “Are you forever loss of purpose in a passive life” – Paradise Lost / Forever Failure

Will you consider coming to perform in Israel?
Matthieu : I don’t know if it could be possible, the travel must be really expensive from France to Isreal. I think it would be difficult for someone to make us come and play in Israel; but of course if we had the opportunity it would be a pleasure.


I’d like to thank Matthieu and Carline for their time and effort and also to wish them the best I can for their future.