A: Hi Rob! First I have to say it's great to have you guys back, would you tell us about the band's reunion?

R: It all started out by chance, a few years back, there was a huge festival organized, its cause was to raise money for Testament's Chuck Billy, it was a one time gig were almost all of the 80's great thrash bands were re-united, Nuclear Assault were there, Exodus, Forbidden Evil, the original incarnation of Forbidden Evil, any way, I got a call from Chuck, and he asked me us to participate as well, now, during that time some of the original line up were already playing together, we were in a band called Swarm, and we used to warm up for Gerry Cantrell during his US shows, we called up Dennis, who was in to it, and another friend of us who took Gus's place, now, the gig was supposed to be two days after we returned from our shows with Gerry, so we really weren't sure if we could do it, but we started do practice, during the tour, during sound checks, whenever we could,

A: How was the gig itself?

R: Unbelievable, it was really something unusual, the moment we went up on stage, all the rust just came off, and the energy was incredible, you wouldn’t believe, the crowd just went absolutely wild, they knew all our material, and were loud as hell, it was probably the best show we ever did,

A: And then you decided on formally getting together?

R: Not yet, we had some time off after that, the idea to re-unite the band wasn’t there originally, we just saw this as a one time thing, we sure didn’t think about the band making g another record or anything, it was just something we wanted to do, but the show went so good that I think all of us had this feeling that we cant just let things disappear, and then we got the offer to play Dynamo, which a friend of ours, Andrei, organized, so we said yes, we thought about it as doing one show in the states, and one in Europe, so we went on and did that, and then we decided on doing a smaller gig in a club in Europe, and it was there again, the rush, the energy, so we just decided on keep on doing shows in the meantime, now, during that time, Jaap and the guys from Nuclear Blast Records just came to all our shows, wearing Death Angel shirts, and they knew all our material, we found out that these guys are long time fans of us, and they just kept on talking to us, asking us to sign with them, well, their efforts paid off, we asked around the States about the label, since we didn’t know them from the past, and people told us good things about 'em, so we decided to sign with them,

A: Not exactly the kind of label you guys were used to…

R: (laughs) exactly, these guys seemed to be in it for the metal, and not just the money, so we got off well together, just so you'll understand the risk they were taking, they signed us without hearing a single new track! That's just how much they trusted us. 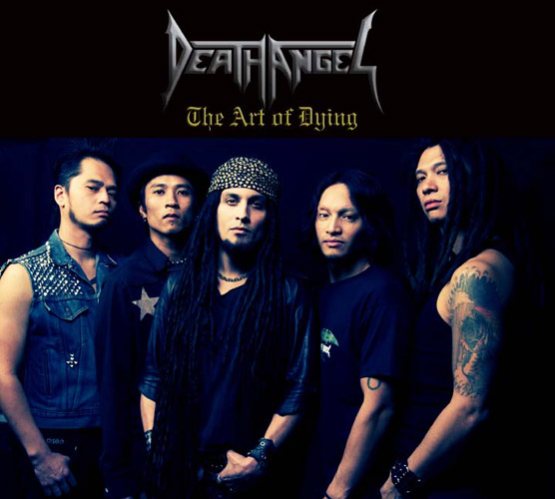 A: So how did the new album get written?

R: Well, this is what happens when you put some musicians together in a room, eventually they start writing music! I just came off with this riff, and Andy would start a drum line, and so on, and we just found out we had almost a whole album written!

A: How did the production of the album go?

R: A great thing was, we found a really good guy to do the sound, his name is Brian Josef Dobbs, and he was the main sound technician for Bob Rock, Mark, our vocalist is a good friend of Kirk Hammet, he actually stayed at his house for some time, when he was having a tough period in his life, so Kirk, who, by the way, also produced our first demo, introduced us to him, and let me tell you, he was great, the guy just knew how to do everything we wanted, we would think of a sound, and he would know how to do it, and the album got to have this really good, live sound, so it has the kind of energy we have when playing live, the environment was also great, we recorded in our home two of San Francisco, in a shitty neighborhood, with drug dealers and stuff outside the door, so the whole thing sounded authentic, and raw.

A: How did the records company respond to it?

R: This is amazing; they never heard it before the release party! They just took a huge risk, the thing was, they arranged a big press party for the album, they brought magazines from all over, and Andy and Dennis were supposed to fly there and do
It, the thing was that the album wasn’t ready yet! We actually recorded the tracks right before the party, and sent them over there by the internet; the last track reached them 10 minutes before it was supposed to start! So the first time the company heard the songs was at the party itself!

A: You could've recorded a Hip Hop album, and they wouldn’t have known,

R: (laughs) yea, that would have been a surprise! But they were so cool about this, they really trusted us, and at the party everybody was impressed, and it turned out real well,

A: A painful, yet necessary question is, why did the band disappear? You were at the top of your success, following a third album which even had some MTV rotation, why did you guys quit?

R: It was all quite sudden and painful, when we started out we were all between the ages of 13 and 17, Andy was the youngest, just 13 when we started out, so we were very naïve, we just wanted to thrash, nothing more, money and the likes of it didn’t interest us, and since we all lived at our parents houses, we really didn’t need, it, later, the success of the first two albums got us signed with Geffen Records, a major, and our third album, Act III also did real well, but the thing was, when we changed labels, there were a lot of pissed off people, Geffen baited us, but never took care of all the legal aspects, and a lot people who wanted money off us started suing us, it was just absurd, we would spend the night playing a gig, and the following day sitting and talking to lawyers who wanted money! Just so you understand, we sold a lot of records, but Death Angel never made any money! All our time as a band, we never reached any profit, while the people around us were making loads of it! When we did Act III we were around 21, and we actually needed that money, but the thing that sealed it, was when we were in an accident, and Andy got hurt really bad, he couldn't drum for a year, and we wanted time off, but the label kept on pushing us, they wanted us to get a new drummer, but we wouldn't do it, at the end, Mark just caved in, he had enough, he moved away, and wanted out of the while music business, and I can understand why, we then decided to bury the band, there was no point in gong on without the both of them, and we just put the band to rest.

A: You then continued under a different name,

R: Yea, the Organization, or The O, I sang on the O, and the music was quite different, more diverse, not exactly thrash anymore, the thing was, it didn’t catch on, people kept looking for Death Angel, and it wasn’t there, so people kept away from us, the label we were on, Metal Blade, wanted o use the Death Angel name push us, but I kept resisting, it was actually something of shooting ourselves in the knees, since we just wanted nothing to do with Death Angel, and wanted to move away from it, but what it did was to alienate people, and the label as well, eventually, and it became really rough, we didn’t have any money, no more tour buss, we had to carry all the stuff ourselves, in our own cars, get day jobs, it was difficult, a really shitty period,

A: Then you went on to the Swarm,

R: Right, the thing is our new album contains motifs from both the O and the Swarm, I also sing there, as does Andy, so it has a bit of everything,

A: what is the band doing now?

R: We're just taking things steadily, doing shows, enjoying ourselves, we just did some great gigs in our home town, then were going to do the West Coat, and then some time off, which I really need, since I just had my first son born,

R: Thanks! And then we're going to Europe, then Japan, and then probably Australia,

A: did you expect the amount of success your reunion would bring?

R: I really didn’t, it was a shock for me, we had this feeling of something big when we did the reunion show, but we never expected this much, but its all so different now, we are mush more in control, and its all fits so well I cant really believe its happening, its like something is making up for all the shit we had to put up with!

R: Exactly! I believe everything happens for a reason, and this was probably meant to be,

A: well, thanks for the interview, Rob, and I hope things will keep on going as good as they are now!