A: First question is, I understood the band is recording a third album, tell us about it and the process of making it.

D: Yes we are, we have been working on it for quite a while. Right now we have four
songs recorded and they sound really great! The recordings are done in the same way
as on II=I, we record everything ourselves. Our keyboard player, Martin, is an
educated producer so we don’t feel the need for an outside man. As we are doing now,
we can record in a very relaxed atmosphere without time limitations.

A. How you we're picked to be the band's vocalist?

D:I got to know Marin through the Music Academy where we both studied. So basically they
Just called me up and asked if I wanted to do an audition. The chemistry clicked
Right away and a couple of weeks later we had our first gig.

A. What were you doing before joining the band?

D: I’ve been playing different bands since I was eleven or something. After high school
I studied music science for a year, and then I went on to study at the Music Academy
for five years. That was two years ago, since then I have been a professional
Musician. 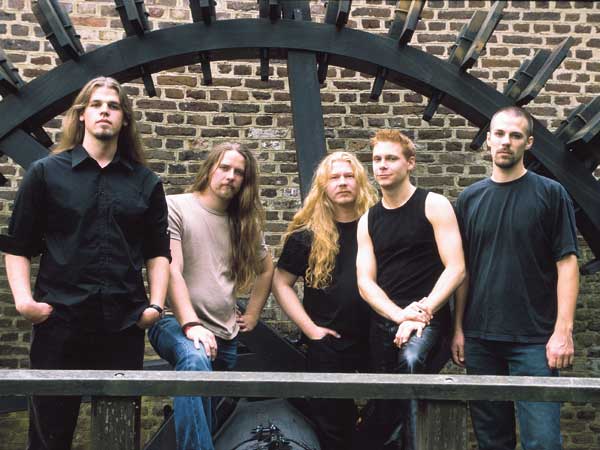 A: The former vocalist, Lawrence, is known for his more extreme projects, which had some effect on his way of singing in the first album, what are your own influences, and in what do you think your vocal style is different from his?

D: If you take a look at my wall of cd´s you will see that my influences comes from
Everywhere. Singer wise, people that have influenced me... I must say Paul Stanley
from Kiss. This guy has grown through the years and never has a bad day. Very
professional. Bjork is a remarkable creature that goes where no one else has gone,
she is so free in her musical thinking that it is a true source of inspiration. Ian
Gillan, also a powerful singer with a whole lot of black music in his spine. James
Hetfield, I listened to Metallica exclusively for years. He got a commanding voice.
You don’t argue with Hetfield. There are lots of inspirations just to mention a few.

Me and Lawrence differ quite a lot. I think he did a great job on the first album. I
did a re-recording of it for the french market, it was hard for me since his vocal
range is a bit lower than mine. My voice fits our second album much better I think.

A: The band is considered as the brainchild of Johan, is it a democracy when
creating new material, or is controlled by him only?

D: Many people have the perception that Johan is some kind of band Hitler but that’s
Not the case. The first album was his album. He wrote everything and had demos of
all songs ready when the band was formed. But since that album was made and I got in
The band it became a real band with full democracy. Of course the one who wrote the
song has more pull on arrangements an so forth but everyone is very open for inputs.
Johan, Martin and me are writing the songs.

A: The band is has taken a forefront in the progressive metal genre, in what way do
you think the band differs from other progressive bands, such as Vanden Plas or Dream Theater?

D: To be honest I think we are more original than many bands out there. I hate when
people keep referring to us as a DT band because we are not. Everyone is very
open-minded musically. We simply write the music that comes out of us, it happens to be
progressive metal. What we are trying to accomplish is to do the album that we would
buy ourselves if we heard it in the store.

A: Which band would you call your favorite progressive band?

D: An obscure German band from the seventies called SFF. They did three great albums, in
Particular the first one "Symphonic Pictures" is a wonderful album that I never grow
tired of. The funny thing is, they play instrumental music...

A: Regarding the II-I album, what does the title stand for?

D: Actually it is a blend of things... We had the title song written with the same name.
It felt like the first album as a whole band. Half the album is about schizophrenia
and finally, it just sounded good.

A: The lyrics seem to be based a lot on science fiction related material; as of course is the band's name, what are the origins for the lyrics?

D: The lyrics on the first album were all made by Johan, on II=I me and Martin wrote
all the lyrics. So they are about many different things. Nowadays I would have to
say that they are about people in strange situations.

A: I noticed that both you and Johan handle the vocals, who does what, and how do you divide the singing parts?

D: That’s not correct. I handle all lead vocals. And on the albums I do 90% of the
backing vocals as well, Martin does the rest. Live however both Martin and Johan do
backing vocals.

A: What live shows the band did do you remember as the best, or most memorable?

D: I must say when we got to Paris. We didn’t expect the welcoming that we got. It was
a packed club, really sweaty. As martin started of the intro to "the words unspoken" the crowd went wild and he got so surprised that he almost stopped playing. It was great, I have it on a cd.

A: What are the band's plans for the next few months?

D: To finish the album. I am really looking forward to getting it released and for you to hear it. And when we are not recording I plan to enjoy the Swedish summer as much as possible. When you live in a country that is dark and gloomy for most of the
year, you can’t sit indoors when the sun is shining.

A: That's it! Thank you for taking the time to answer my questions!