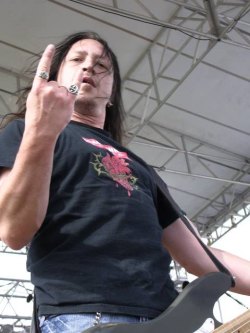 American Hard rockers' American Motherload have delivered one of the most impressive debut albums I've had the pleasure of listening to – "Come To Life", a combination of old school American hardrock with more metallic heaviness and severally catchy and well-crafted tunes.
To find out more about this excellent and strangely almost unknown band, we asked the band's bassist, Geoff Jania, some questions:

Hey Geoff, I'd like to start with current events, how was Christmas and the new year for you?
They were fantastic! Spending time with the family and friends was very refreshing for me.

What is the band doing these days?
We just got our new drummer, Robert Harrison and he’s lit a fire under our asses. Now we’ll continue writing songs for the next album.

About your debut album – "Come To Life" – I actually have a different version of it than the one in your website, with a different cover, did you re-release it?
We changed all of the artwork at the request of management and the label. I’m happy with both but I guess they felt it looked a little too dark for our sound. 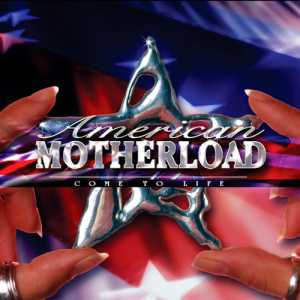 Since the album's release, what kind of interest did you get from labels about it?
Well, it was released on an independent label, Zant Records, here in the USA. That label folded about September of last year and we just moved on to writing new material. It really should be shopped to labels or at least distribution.

Some history about the band, how did you guys start out?
Four of the original members had been in a local band called “Crime” together. When we fired our old vocalist we knew we wanted Ben to join the band. We’d seen him in one of his old bands and we wanted someone with the ability to actually sing. And he sings like a motherfucker… We’re on our third drummer now also. Robert brings a new element to the band. He’s a fantastic showman and he swats them like Shannon Larkin from Godsmack. 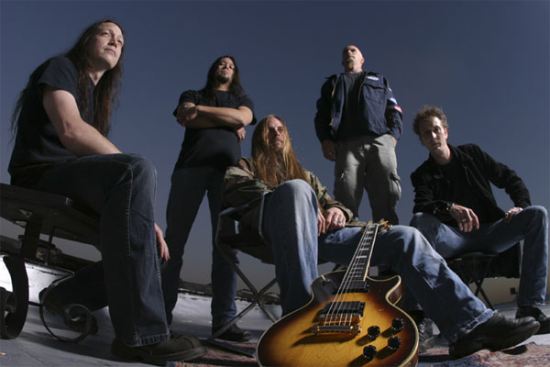 Why "American Motherload"?
We originally called the band Motherload - A deliberate misspelling of the term mother lode. There was a local cover band that actually threatened us with a lawyer over the name. We added the “American” to the name at the suggestion of our guitarist, Ray. It just better describes us as a band as well as the music.

Musically what artists would you say influenced the band's music most?
That’s a tough one. We have some elements in common like Black Sabbath, Led Zeppelin, AC/DC and then we have some more contemporary things like Alice In Chains and Godsmack. The truth is we all listen to different stuff.

Your music is very much rooted in American hard rock, do you feel it has an appeal for rock and metal fans outside of the US?
Yeah, I think so. Most people don’t choose their music geographically. When I was a kid I bought my music from the ‘imports’ section of the store. Most people get their music online now which really tears down a lot of barriers. We sound American… but I think it’s a plus.

What kind of a music scene have you got going right now in Chicago?
The scene in Chicago has been great lately. There are a lot of bands that work together and get along like family. The clubs here are amazing too.

Is the city a good place to grow for a hard rock band?
Definitely. It takes time to get a new band noticed in Chicago because there are so many bands, but once you’re on the radar you can really advance quickly.

Why did you choose to cover "Devil Woman" on the album?
Ray heard it on an oldies station and suggested it as a cover for our live show. It went over so well we figured “Why Not?”.

I understand you also play guitar in a punk band called The Lusties, are you originally a bassist or a guitarist?
Actually I was a guitarist first and switched to bass in my mid teens. Now I play both so I can Better express myself.

Which of the groups would you say is your main thing?
Well, the AML project has been around a lot longer but I treat them equally. One is hard rock, the other is punk/pop so there’s no competition between them. I consider them both to be family and I love the music from both equally. The Lusties have just as much fire as AML… Anything could happen so I’d like them both to do equally well.

Where do you think the band fits in the US rock scene these days? Are you guys modern enough for trendy musical tastes?
I don’t concern myself with trends. We have our own space in the American rock scene. We’re not following anyone else’s lead and that means we’re free to write and play what we feel in our hearts. Most bands don’t have that luxury.

It does feel to me that a band of your caliber should be on a major label, what with such other, mediocre groups there already, do you feel the same?
To be totally honest, when I hear a new band that sucks I wonder just who it is pulling the strings behind the scenes. Majors are the goal of most bands but if they’re making shitty decisions from the moment they actually sign a band then I’m not so sure that I would want them making decisions for me. Sure we’ll shop our stuff around but we’re not going to settle for less than we would expect from ourselves.

What is the band planning for the next few months?
Work! We have some new material we need to finish and about a thousand new riffs waiting to become songs. We’ve just come off a six month break (our first since 1999) and we’re all burning to do it again! First we write and play a few shows… then it’s time to record the next disc. We’ll make sure you get a copy!

Thanks a lot for doing the interview, and good luck with the next album. I'm sure I won't be the only one looking forward to it.
Alon Miasnikov
Share |
blog comments powered by Disqus