Monday evening, a match between England and Croatia just came to its end, 4:2 to the English team, and finally the phone rings, a happy Blaze Bayley:

B: Yea! It was a great match; the British team is really good this year,

A: Too bad the French have a great team as well…

B: Yea, well, the British team is probably the best we had since the last time we reached the finals,

B: I remember that… 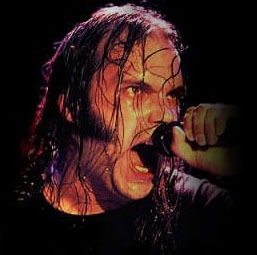 A: So, let's cut to the chase, a new album out, your third solo one, why is the title "Blood And Belief"?

B: Well, the Blood is the music, the Metal, which is my life's blood. And the Belief is my belief that when you do something right, with the proper motivation, you can't go wrong, that's what you need in order to go on, not MTV, or huge sales, but the belief in what your doing, I had several ideas when thinking of a name, but when I heard the guitar demos, it just seemed to fit together, especially with all of the lies and deceit handed to me by the Sanctuary Management.

A: What do you mean by that?

B: Well, just that my former management, Iron Maiden's management, have been intentionally aiming to harm me, and my band's career,

B: One thing they did was to release Maiden's Brave New World the same week my first album came out, which, of course, damaged it's sales and media coverage, for my second album, they actually lied to me about it's release date! SPV, my label, told me it's supposed to be ready by September, but Sanctuary told me what's wrong. And that it had to be ready by Christmas, March, so I rushed things, and we had a lot of pressure, and it was ready by March, and, strangely enough, it wasn't released on Christmas, but half a year later! So what's I think is, that Maiden's management just didn’t want me causing any damage to Maiden's reunion with Bruce, They were afraid that if I would succeed following my departure from Maiden, it would prove that Bruce's return to the band was done just for the money, I mean, I played to masses of Maiden fans, but very few know that I have a solo career,

A: The fact that Maiden's reunion was from mainly financial reasons is quite clear,

B: The management saw dwindling record sales, and Bruce wasn’t doing so well with his solo career, so it was the smart thing to do, but for me, it isn’t the money, I would play either stadiums or a room in a pub, I may not be the greatest vocalist in the world, but I love Metal, and I do it for the love of the music, there are fans that liked my vocals, and as long as I enjoy what I'm doing, I'm going to keep on doing it, with no regard to getting rich of it or not,
Let me tell you something, when I was in maiden, when a show was finished, we just got straight to the bus, and went to the next one, no meeting the fans, no autographs and that's half of the fun for me, meeting the fans, signing for them, and I always regretted not having the time to do that, and now, its different, I like meeting the fans that come to our shows, its much more personal, and I enjoy it!
I think that Maiden saw and envied such a reunion as Black Sabbath did at the time, and thought that was the thing that caused them to plan that reunion with Bruce, but I believed in the band, I still think that The X Factor has some really great songs, but they just didn’t want to keep on trying,

A: So they, or the management, rather, did things to harm your own career?

S: Definitely, every single interview I gave, they had Maiden interviewed in the same issue, so they got all the covers, naturally, and this time, this album, I just told myself, if this is the last album I'll put out, I want it to be the best one yet, one I'll be pride off.

A: Your current manager seems very different; he sure went through quite a lot in order to set this interview,

S: Israel has a special place in my heart, and it always have, it was my first show in my tour with Maiden, and though I was really nervous, it was a fantastic gig, the crowd was unbelievable, singing all the lyrics, going really wild, it was one of the wildest crowds I ever saw, and then we went, early in the morning, to do the Man On The Edge video, in Mesada, it was great, I would happily do such a show again, even though the British consulate advices against coming to Israel now, I would happily do a show there, in any size of venue, as long as our light is paid, I would do it,

A: You we're offered your first headlining show recently,

S: Yea, the Badia Rocks festival in Italy, it's supposed to be amazing, it in a huge cave, but I don’t really believe it'll happen until we're on a plane to Italy, I don’t build up expectations, so I wont get disappointed, but I'm hopeful it'll come through,

A: Even though...a huge cave…doesn’t sound that safe…

S: We had this show with Maiden, in Turkey, and we didn’t realize it at first, but there was a huge hole in front of the stage, it was this old, roman like coliseum, with this gaping hole, 6 feet deep in front of the stage, and no fence or anything, so when the show started, and people started pushing each other, they started to fall into the hole! We had to stop the show, and people were being taken in ambulances!
The next evening we warned every body in advance, and this time it went well…

A: You're also supposed to do a show in Turkey this year, in the Rock The Nations festival,

A: there will be plenty of Israeli fans there, as an Israeli metal band; named Orphaned Land will be performing,

A: Did you meet him before?

S: I did actually, it was after a show we did in England, and it was a real shock to me, since he told me he didn’t like metal! He said he was always more into hard core and stuff, and to me, it was a shock! I mean, the guy's one of the forefathers of metal, the guy who sang on Killers! I don’t know, I'm into a lot of different music, but metal is the music I turn to when I really need something to lift me up.

A: Was the new album recorded with Andy Sneap again?

S: Yea, he just moved into a new studio, and we we're actually helping him to settle there during the recording, moving stuff about and such, but he really made things work, he knew I'm best when I'm in a live environment, so he just gave me a mic to hold, and we played live in the studio, with all the energy we have, no only does he understand metal, but he always says the performance is more important then everything else, and I think that is what makes him such a great producer.

A: Tell us about the inception of the band, and why did you call it Blaze?

S: When I was out of Maiden, I wanted a real metal band, with two guitarists, now, my name was rather known at the time, so it was quite a natural chose for a name, we just evolved during time, into a real group, our bass player and drummer left, but it’s the three of us, me and the two guitarists who are the base of the band, our bass player just wanted to create heavier music, while I like stuff that's also melodic, and the drummer just wanted instant success, instant results, which then the band just didn’t have, but I am lucky to have found such great guitarists, that share my passion for the band,

A: Did you know them before the band was created?

S: Yea, but I never heard them play; I was sent some 1000 recordings for the first album, and they we're just the best,

A: I understood you've just celebrated our birthday in Italy,

S: Yea, it was the best birthday I could wish for, I did a show with a maiden tribute band called the Clairvoyants, I sang really well, and it was an excellent show, some of the songs where recorded and we'll post them in our site, and also a video from the show,

A: what other live shows do you have planned?

S: I'm going to do a life, philharmonic show with Doro in Germany, I'm guest singing on two tracks, Maiden tracks, it s a huge thing, with more than thirty classical instruments, it'll be done in Wacken, and then we have more shows, with the band we're supposed to go to Belgium, do shows in England, France, and then we'll see, we also have a DVD later on, but it's going be something special , we want more then just a live DVD or something, we're going to have load of bonuses, tracks from several shows,. It'll be something really good.

A: We'll look forward to that, thanks for talking to me Blaze!