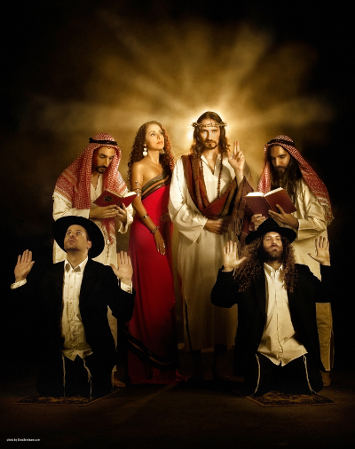 On February, 9th 2010 (January 25th in Europe) Israel's Orphaned Land will finally release their highly anticipated fourth studio opus The Never Ending Way of ORwarriOR. Mixed by Steven Wilson (Porcupine Tree, Opeth), who is also responsible for several keyboard parts on the new album, The Never Ending Way of ORwarriOR turns out to be a sophisticated concept album taking Orphaned Land's unique brand of exotic, heavy music to soaring new heights in terms of complexity and catchiness. It is an audible manifest that the time has come for Middle Eastern metal to take over!

Part I
Godfrey's Cordial – an ORphan's life
1. Sapari
2. From Broken Vessels
3. Bereft In The Abyss
4. The Path Part 1 – Treading Through Darkness
5. The Path Part 2 – The Pilgrimage To Or Shalem
6. Olat Ha'tamid

Part II
Lips Acquire stains – The warriOR awakens
7. The Warrior
8. His Leaf Shall Not Wither
9. Disciples Of The Sacred Oath II
10. New Jerusalem
11. Vayehi Or
12. M I ?

Vocalist Kobi Farhi comments on the album's concept and the striking new promo photo as follows:

“First of all, I wish to thank each and every one of you for all the comments you left for our new band photo. The comments were from Jews, Christians and Muslims as one, you all know that this unification is what we’re all about - here is the tracklist for our new album, as you can see it's long and it's a three chapter story that is waiting for you. We salute you all!”

Farhi continues:
The Never Ending Way of ORwarriOR is a concept album revolving around a hero: the warrior of light. This hero isn't someone specific, but could be the listener of the album himself, as this album deals with the problems we are facing in our lives every day. Especially here, in the Middle East, we feel that we are trapped in a loop of confusion and darkness. Living in this region, we see that year after year nothing changes. People continue to die in useless wars and we are trapped in a bloody circle. ORPHANED LAND has been around for 18 years and we continue to sing about the same subjects and stories, because after 18 years we are still living in a tragic, orphaned land. To fight this tragedy we have chosen a peaceful, yet powerful weapon: our music.”