With a little help from my friends 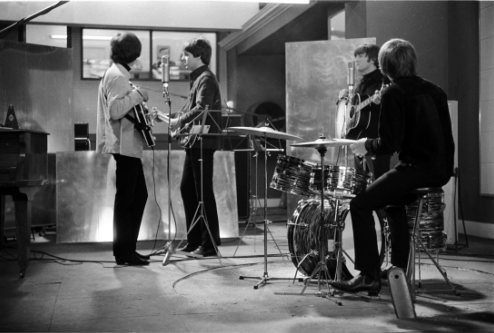 Everything they touched turned into pure gold
The year is 1965: India adopts the Hindi as its official language. The United States sends off its first fighting forces to Vietnam. The Beatles premier their second movie "Help!".

In oppose to their first movie "A Hard Day's Night" (1964), which was a docu-parody on a day in a life of the fab four, "Help!" is a colorful story-based movie. The movie is about a distant and neglected tribe that finds itself in a problem when their sacrificial ring is gone. Without this ring they can't make their sacrifice needed for their gods. Whoever holds the ring is the one that will be sacrificed. Surprisingly enough, the unfortunate ring holder is the one and only Ringo Starr.
The more sophisticated plot of the movie was probably irrelevant at the time to any Beatlemania freak. At the time, as Eleanor Bron mentioned on the special features interview, it seemed that the four lads from Liverpool were like the king Midas himself, and everything they laid their hands on turned to gold.

2007, 42 year later, "Help!" is being reissued and released in an elegant, well edited and decorated DVD. Of course the second CD on the set has enough interesting and rare special features to attract any Beatles fanatic around.

1965, for a lot of reasons, was a dividing year; a thin line between innocence and greed, love and war. The United Stated sets off for the Vietnam war, the war that will ,in a way, give birth to the flowery hippie generation, which will in the future look up to their TV screens to watch the Beatles declaring that all you really need is love. The LSD revolution (which too had a lot to do with those long haired hippies and the Beatles themselves) was at the culture gates. For the Beatles it was the last year of musical innocence. At the end of 1965 they will already release the "Rubber soul" album, that's artwork and musical content already suggest on a whole different musical influence the band will steer to.

"Help!", a lot like "A Hard Day's Night" (also directed by Richard Lester), is filled with classic British humor. With hints of parody on their cold hard manners, word playing and of course, each Beatle lives up to his characteristics. Lennon is the witty madman funny guy, Paul is the handsome one, Ringo as the never to take to serious type, and George Harrison as the always quiet Beatle. Harrison as always seems to almost vanish in the background, while actually being a main character. You can't avoid the guy who wrote some of the most beautiful songs in Beatles history.

Except for the familiar charm the characters have in the movie, it's backed up by 7 new songs (at the time) to assure this movie as a classic. Songs like "Help!", "Ticket to ride", "You've got to hide you love away" and "You're gonna lose that girl" get almost pioneering video clips in a time when music videos (not made live) were rare if at all existing. On the special features Richard Lester tells how he once got a note saying that he is the biological father of MTV. As a response he asked to do a second DNA test. 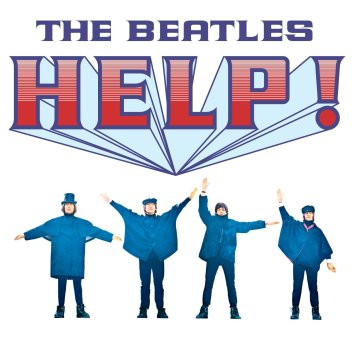 That's how it will look in the store this days
In addition to the movie itself, which is reconstructed wonderfully, both visual and sound, you can find a second disc with special features including interviews, original trailers, and memorable moments. Hey, there's even a deleted scene.
On that disc you can find a Spanish trailer for the move, radio spots with the Beatles, an amusing deleted scene and three documentaries made for the film.

One is about the reconstructing technique used for the film. This part will probably interest hardcore fans and technology lovers.
The second documentary discusses the making of the movie; 30 minutes of "behind the scenes" stories and footages. Mostly fun-facts about how ideas came to be, and how certain locations were chosen…basically, how the movie was done. A third documentary is described as "memories of help!". It shows interviews with different people that were involved in making the movie, about their memories from the movie. Richard Lester and Eleanor Bron get most attention on this one.

The 3 documentaries succeed in being interesting and appealing, and it's always nice to hear from people who were around the Beatles in real time. What bothers me a bit is that from all the people interviewed, none of the actual Beatles was involved.
So maybe cancer and Chapman took Lennon and Harrison away from us much too early, but still, 50 percent of the actual band members are alive. Personally I would love to hear Ringo and Paul tell their own stories.

The beautiful thing about reissues, except for the fact that it helps us keep our visual and audible memories alive is that they give us the opportunity to re-examine those movies and albums; putting them to the test of time, and understanding them on a larger scale. It's much more interesting watching a movie like "Help!" while knowing how the Beatles segue from that moment on.

The Beatles had over passed the time test. It's a fact that doesn’t concern any debate or second thought on. The fact that we now know how their entire career looked like gives us the chance to enjoy the movie on a different scale. For example, it's hard not smile during the airport scene where they dress up with long hair and beards so their chasers won't recognize them. For the movie it seems more like a costume, for the fans these days, it probably looks a lot like shots from their later years' double blue album.

When you re-examine a movie (that in modern scales is really old) and you still find such interest in it, it sometimes makes you re-think of how this movie preserved itself for so long. For the Beatles it's obvious that their music and general status have made a lot of work for it. But still, there is much more to be seen in this movie.

There are more then a few spots in the film where you can believe that they're written nowadays. There is a particular moment when someone looks at the Beatles and mentioned how these days (1965) everyone is just selling sex, and wild rock music instead of high quality culture. You can also take a look at the wild teenage fans they had, glorifying every step they ever did, and sleeping underneath their hotel windows and ask yourself how far this is from being another sick fanatic Britney Spears stalker.

Reading in today's papers, you can easily find accusations on today's "mindless pop". And then, hearing the same phrase said on a band that throughout the years had become a headstone in modern western music makes you wonder if there is any difference between what was said then and now. Or maybe cultural devastation is taking a long time, and still is happening since the sixties

It's hard to put a finger on the Beatles' magic factor. The fact is that even if you grew up on their music while it was being made, or even if you're buying their CD's for the first time only now, you will always have a warm spot in your heart for them.
The re-release of "Help!" gives the new generation a second chance to fall in love with the film, and allows it to create its own meaningful memories with this movie.