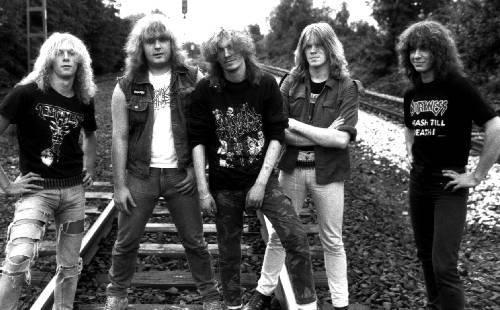 Hi Arnd! I'd like to start with current events, what's the story behind your latest album, Darkness Live?

Hello, Alon,
To be honest, there's no real story behind that album. It was the idea of
Andy from Battlecry Records, the label that re-released the DARKNESS
Albums in July 2005.
He liked the sound of that recording very much and wanted to release that
CD. He thought it would be a good addition to the re-releases

So is the band active again? Are you working on new material?
Of course, we are active again and we are working on new material
But we didn't want to start as DARKNESS again, because we thought it
wouldn't be true. Therefore we've founded a new name: EURE ERBEN.
Eure Erben is a new band, that is built on the roots of our heritage. We
are proud for DARKNESS but we also have developed in the last years.
Olli and Ray are dead, Bruno is castaway, Thomas is playing in a
top-fourty-band and Timo's playing in a different band, he's got no more
professional ambitions, I think. Pierre is making no more music, so Lacky
and me are the only hungry veterans.

That's not what people use to know as DARKNESS, do they?! We don't want to
ride on that wave of re-unions of eighties-bands and we don't want the
people to believe, that we just want to grab some money with an old name.
The most difference between DARKNESS and EURE ERBEN is, that we have
lyrics in German language. It is not just a project but a real band.
In January a new EP will be released with four old songs an two brandnew
songs. On the re-released albums you can find bonus tracks in German
language

I'd like to go back in History now, first, How did you guys start out?
As you might know, the Ruhrgebiet in Germany was one of most creative scenes in Thrash Metal, compareable to the Bay Area in the U.S. There were lot's of bands and one troup knew the other.
DARKNESS was founded in 1984 by Lacky. There were lots of line up changes and a few shows, before Olli became their Shouter.
Olli and me were playing in a Band called "Crypt", Olli was our Shouter.
First Olli changed to "Darkness" for he was involved in the scene around the "Zeche Carl", the so called "Mekka" of Thrash in our area, and he knew Lacky and the others before I knew them. Guys like Mille from Kreator or Tom of Sodom were hanging around with us at "Zeche Carl".
After a short time I was absolutely dissatisfied with "Crypt". Olli and me were still friends and he asked me to change to Darkness, too, and so I did. I was never sorry for that step!!

You were always considered one of thrash metal's noisiest bands, is that something you'd say still characterizes the band?
Negative! We were very noisy on the first album, but we tried to change our style and we worked on ourselves.
Even today we are still hard, fast and brutal, but I think noisy is not the right word.

How did you come up with the Essen Death Squad line for the band?
I think the first line up was the real Darkness line up. We've had lots of changes and played with many good musicians, but the "Death Squad crew" was the most Darkness-a-like.


What kind of metal scene was there at Essen when you started out?
It was absolutely unique and I am thankful for being a part of it! It was great, a mood like a big gold rush.
There were lots of bands and different styles, every weekend there was a show anywhere. We've had (almost) legendary clubs like the Mephisto or Zeche Carl, it was something like our second home. All the good people met there and had a party, the bands and the fans together.
The 80's were absolutely unique, especially in the Ruhr area. It's hard to realize that these times won't return!
What -thank god!!!- remained from that time until today is the underground scene. In that scene fans and bands don't really care about trends. What has remained in the Metal scene is a very good organization.

What certain interesting events from that time do you recall today?
It would be too much to tell! Lacky has got a few hundred pictures of that
time and every picture keeps a story! It is so much to tell, it would fill
books.
But you can read some interesting stories inside the booklets of the
re-released albums (I have to do a little promotion for us right here,
hahaha).

Why did the band break up?
That is a long story.
I don't exactly remember the reason, why Bruno had left the Band. I think, he had to do civil service and was no longer interested in playing with us at a certain point. In that time we often had a deputy for him, Kuno, who was a relation of Pierre. It's crazy: I only met Bruno for the "first" last concert in December 1988, after he had left us. I've never seen him since that day; I don't know where he is and what he's doing. Bruno was the first who left the band, instead of him Thomas came into the band.

Some time after the first album Olli began to go astray. He was more interested in Hardcore and Punk and later on in Gothic music like "Fields of the Nephilim" than in Thrash or Metal. His mind and his image changed and slowly he began to lose his credibility; folks recognize changes like these! Further on he was missing in the rehearsals and didn't do anything for the band. He was rather interested in party's and alcohol than in working for DARKNESS.
To make clear: I don't want to blame him for anything or talk bad about him, but we all had our part in the conclusion of DARKNESS, even Olli.
So we became more and more angry about him, especially Pierre, who wanted to change the rough sound into more precise and technical playing. Pierre was influenced by bands like "Watchtower". We all thought, that Olli's attitude to DARKNESS was not enough professional, but we shrank back from firing him.

During the recordings to "Defenders of Justice" Olli was drunken very often and when it was his turn to sing, he almost wasn't able, because his voice suffered from his alcohol consumption. He even didn't knew the lyrics, I had to do pilot-vocals for him and he sang "on my voice", which was deleted later on.

When we had finished the recordings Pierre made his decision and left the band. Instead of Pierre Jצter joined the band, who is our axeman again today. Parallel to this Thomas had an offer from Holy Moses and left Darkness, too. Instead of Thomas Timo became our new bass player. The line-up was now: Olli, Lacky, Timo, Joeter and me, Arnd.

We played a few gigs and after some time it became clear, that the line-up changes were too much for the fans. Further on we had some private differences and due to this we decided to end with DARKNESS. We played that "first" last gig at Zeche Carl, where everything had started once.
But after that show we all were very dissatisfied with our "new life". Our label called us and said, they've got a right for a third album and they insist on it. So we had to write new songs and we were looking for a new shouter. All the rest is history: we wrote new songs, met Ray, who became our new shouter, we recorded "Conclusion" and played a tour through Europe with MUCKY PUP. During the tour it became clear, that this line-up would never work and that actually nobody was interested in DARKNESS anymore.

The end of the tour was in fact the end of DARKNESS.


What were you doing as a musician since?
After DARKNESS I tried to start up with a new band, but all my attempts failed. After some time I was very dissatisfied with myself and what I was doing and changed the scene.
I have to admit: I've played popmusic, first as musician, later as songwriter and producer. When I now look back at that time, it seems very dark to me, just as a if I was a different person.
After a few years I felt, that I went astray but I wasn't able to find the way back - do you know what I mean?!
In that time Lacky forced the idea of DARKNESS / EURE ERBEN and he gave me back my guitar and "my life". We both still share the old spirit and the old hunger..... 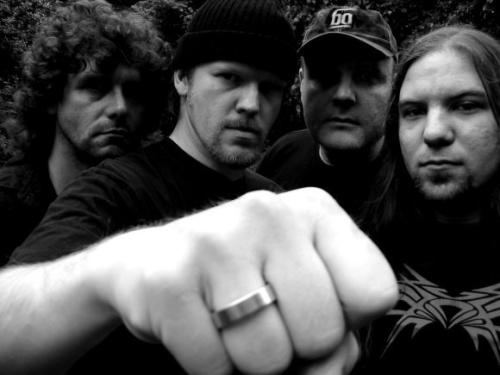 How did you re-group?
That's a longer story.
Lacky and me kept making music after the end of "Darkness". We didn't play together but we've always been in contact. Even though we were busy in music, after some years we were both very dissapointed with what we did.
In the year 2002 Lacky had the idea to start "Darkness" again, but I wasn't very happy with that. We played a few rehearsals and recognized that it is not really what we wanted. But we also felt that we have still the old spirit and the old hunger. In 2004 we decided to start again.
But we didn't want to swim on the revival - wave as many other bands did, because it would not have been upright. There were only two members of the original line up left and we didn't want the people to believe, that we just want to grap fast money with a good old name!
So we decided to start a new with a new name and a new image and just to link to "Darkness". At least we can be very proud for "Darkness" don't we?!
We contacted Emma, who's now playing the Bass and who sung in the choir and played some keyboards on the "Defenders" album. So he's almost a former member.
At least we remembered Joeter who is an old Thrash veteran, too. I do the
shouting, and now we are "Eure Erben".
The biggest difference to "Darkness" is, that we do german lyrics. We've recorded ten old and two new songs, with german lyrics and in the new style. The new EP will be released soon, parallel to this the old albums were re-released in July 2006 with lots of bonus stuff by a small label named "Battle Cry Records".

Do you feel a growth in the German thrash metal scene these last few years?
No, not a growth. There have always been bands, better or less good. But I don't feel an improvement. The scene was always dominated by the popular bands, such as SODOM, KERATOR or DESTRUCTION.
The young bands never reached them. I don't say, that young or new bands are bad, but I miss fresh and new ideas.

What kind of live shows did you do since regrouping?
We have played some gigs in Germany and we are going to play more concerts and festivals. We are playing the most shows in clubs.

Your classic albums are hard to get a hold off, have they been re-released?
Yes, the albums have been re-released by a small label called Battle Cry Records.
The albums contain lots of bonus material such as photos, liner notes and on each album there's one of the old demos.
You can get the CD's via Mailorder on the web at www.battlecryrecords.de or directly on our site www.eureerben.de.

Any last message to the Darkness fans out there?
Thanx to all the people in the entire world for keeping the old spirit alive! You've made us believe in ourselves again and gave us the power to start something new out of something old. You really rock!