One of thrash metal's finest bands, Defiance released just three albums that are long considered as some of the genre's best.
I was in for a pleasant surprise when hearing that the band is active again, in almost their classic line-up, and are working on a new EP.
To get the lowdown on current events, I got the band's guitarist, Jim Adams, to answer my questions: 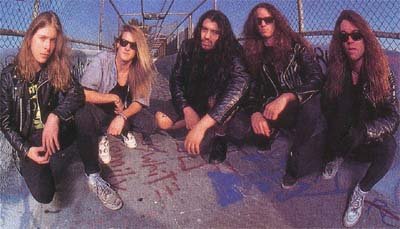 Hi Jim! What's up these days with the band?
Well, right now we are working on the second two songs for our 4 song EP. Steev is working on the lyric arrangement on the first two songs that we have completed and recorded a pre-producton demo with. I’m hoping that we will have all four songs ready by early next year.

How does the current material sound in comparison with your older stuff?
It is hard for me to judge it since I’m so close to the project. I’d say it is a mix between the style on ‘Product of Society and ‘Beyond Recognition’.

The only un-original member in the band, is your drummer, why didn’t Matt Vander re-join?
Matt was very interested in doing the project, unfortunately for us, he moved to New York City late last year and landed a great gig in the touring production of the Broadway play ‘Wicked’. He has been touring North America almost all year. We realized that if we were ever going to get this project off the ground, we would need to recruit a new local drummer. It took us almost 6 months, but I think we found the perfect fit in Flatline.

How did the whole regrouping of the band take place?
We had talked about doing a reunion show a couple of years ago, but it didn’t work out due to conflicting schedules. Last year, I launched the Defiance website. That got Mike and I talking about trying the reunion show idea again. At the time, though, Matt, Steev, and Doug were all busy with other projects/commitments and we didn’t’ really get it off the ground. Mike and I got together a few times to jam some of the old tunes, and even got Doug to show up for a couple of the jams. After that, it lost some steam. At the beginning of 2005, Mike came up with the idea of doing a studio project instead of a reunion show. That went over well with everyone and we officially announced our plans in late January of this year. 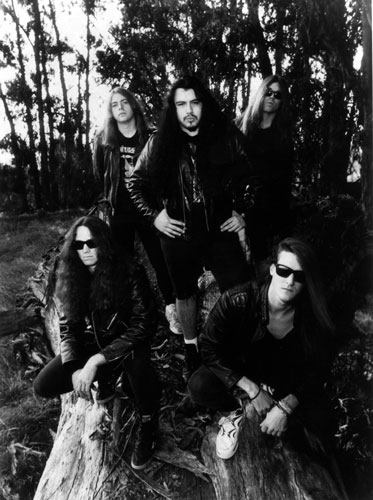 What were you doing as a musician before the reunion?
Not much really. I had not played much at all since I left a project I was working on with Perry Strickland from Vio-lence in 1997. Doug Harrington had started a cover band called ‘Fat Freddie’s Cat’ in 2000 after he left Under (the final incarnation of Defiance). He asked me to play with his band, which I did for a few months in 2000. I played one gig with them, it was a lot of fun, but I was concentrating finishing college and starting a new career, so I didn’t really have time for playing much. That changed in 2003, when I decided I needed a hobby. I figured playing music made sense, so I bought a used Line 6 amp off of eBAy and started playing for fun again. In 2004 I decided I wanted to get more serious about it and started relearning some of the old Defiance tunes to get back in ‘playing shape’. It was around that time that Mike and I started talking about getting Defiance back together.

I understand after Beyond Recognition was put out, the whole line-up changed, and the band was actually dead, why did you leave back then?
Well, after we finally finished recording ‘Beyond’, the record label released the album, but didn’t really try and push it (advertising/tours etc.). I kind of saw the ‘writing on the wall’ and decided I needed a change. I had no hard feeling towards anyone in Defiance. It was more about me being at a bad place in my life and wanting to make a change.

What did you do straight after leaving the band?
I left Defiance and moved to Santa Barbara, CA where I joined a band called ‘Indica’ which had my best friend and band mate from high school on drums, Tyler Clark. Defiance continued on with Scott Sergeant from Laaz Rockit on guitar. He ended up recruiting Matt Vander Ende away from Defiance to join Laaz. It was in the Spring of 1993 that I returned to Defiance.


Is Steve still with Skinlab, are they still active?
I’m not sure what is up with Skinlab right now. Last I heard they had gotten the original line up back together and were working on new songs. I haven’t heard anything new since then. I know Steev is very busy right now with his other band Re:Ignition. I believe they just started work on their debut CD.

Steve's vocals were often compared with Testament's Chuck Billy's, do they still sound the same they did back then?
No. His sound has changed a lot over time. He has ten years of experience playing with Skinlab and more recently Exodus which has helped him to grow as a musician. Every musician continues to grow and develop over time. I certainly hope I am still growing too.

Your albums are some of my all-time favorite thrash albums, what about re-issuing them? Was that brought up?
I did speak with the executive from Roadrunner who originally signed us a while ago about that exact subject. He told me that they did not have any plans at that time to re-release any of our CD’s beyond the re-release of ‘Void Terra Firma’ in Japan.

A lot of the classic thrash metal bands, such as yourselves, have been re-united lately, have you been in contact with any of old-time friends from those bands?

Other than the guys from Heathen, I have not been in contact with anyone…well unless Lee counts for Exodus now too. I believe Steev is still in contact with some of the bands, Exodus especially, since they both practice at the same studios.

Did you do any live shows yet?
How far do you see the band taking its new life, a record deal? Touring?
No, no live shows. We are just concentrating on the studio project for now. Once we get the EP completed, then we will see if the right opportunity arises.

That's it, thanks for taking the time doing the interview, and good luck!
Thanks Alon!