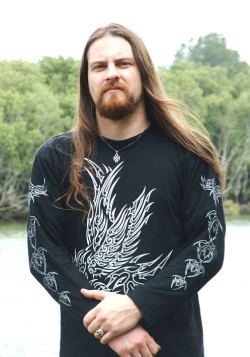 Hi Luke, I understand the band will soon enter the studio to record its first single since reforming, what can you tell us about it?
Hey mate. It’s a song called “out of the darkness” we thought we’d do this one first cause we feel its definitely a sign of the way things are now for mortal sin. We want to give people a bit of a brief glimpse into the new album.

I understand you also did a video for the track, what's in it?
We shot the clip before we recorded the song which is a bit backwards! Haha it was shot in a warehouse in inner Sydney by a local production company. Theres basically some live footage mixed in with some story line stuff which the producer wrote. Matts daughters probably gunna be doing the story board parts so that should be cool! It’ll be on the CD with the single
.
It's the anniversary of two of the band's classic albums soon, how are you going to celebrate that?
Get pissed!! Haha We’re looking at doing a couple of shows around Sydney, just local stuff, we were really hoping to have a re-release of both of them as well but theres still some licensing issues that Matt and Andy are working on. Hopefully they’ll be resolved soon. Other than that we’re just gonna do the shows. We were toying with the idea of doing MAYHEMIC DESTRUCTION live from start to finish ala slayer! But we’ll see how that goes.

What about the complete new album, what can you tell us about that?
So far its untitled. Its got everything man! There isn't one genre of metal we haven't covered on this! We’ve got everything from hard rock to flat out blast beats to progressive dream theater-esque style stuff. Cant wait to get this out man, your all gonna love it!

Did you manage to secure a label contract yet?
Not yet. Its all a catch 22 situation. We need a label to help with funds for the new album but they wanna hear new recorded songs before they sign us! Stupid situation I know but it would seem, for now anyways, we’re gonna have to look at other means. Even though is there is any labels reading this CONTACT US!! Haha

You did a tour with Anthrax lately, how was that for you?
Fantastic man! That was my first ever tour and to do it with mortal sin supporting anthrax who are huge influences of mine was just surreal! Those guys really showed us a thing or two about live performances! Every night man they went off! I spoke to Frankie and Charlie after the last show in Perth and they were all crook as a dog the whole tour! Was awesome for all of us. I remember Matt coming into rehearsals and saying “how will u feel if your first show with us is supporting anthrax? And me going weak at the knees! Haha
But man by the time the last show came around we all knew that this was the resurgence of mortal sin we've all been waiting for!

What does the Out Of The Darkness DVD include?
That was recorded a little while before I joined. Its got mortal sins first live show since about ’97 I think! Awesome night for all. Plus a gig back in 87 at the seven hills tavern in Sydney, also some interviews with the guys. Makes for some good viewing!

Can you tell us about how you joined the band?
I came across an add in the local music mag here saying that the guys were looking for a new drummer after parting ways with Wayne Campbell (original drummer) so I rang Andy and said “I’m the man!” haha crammed all there songs into my head in about 3 weeks, jammed with them then hassled them for 3 days until they said yes! Haha 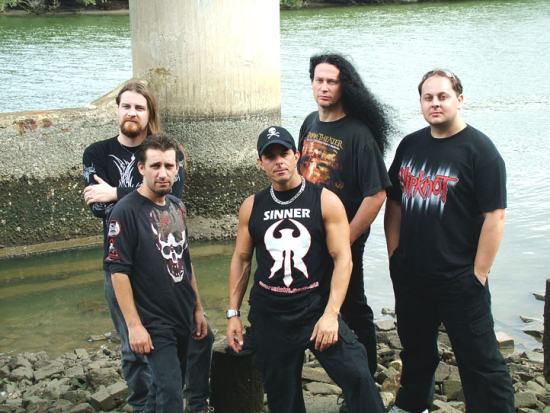 In what bands did you play before that?
Me and Nathan Shea (mortal sin guitarist) were in a couple of cover bands before this. One being a slayer cover show, the other doing all old maiden, Megadeth, Metallica, Slayer, Sabbath etc. Andy asked me when I rang him if I knew a guitarist and I put Nath forward. I knew that he was just a wasted talent playing covers and if I was gonna do this with anyone, it’d be nath! Awesome and creative guitarist.

How knowledgeable were you with the band's material before you joined them?
I knew of mayhemic and face of despair but never really went out of my way to learn them. Of course I knew the classics like Lebanon, I am immortal and mayhemic destruction but that was about it! I don’t think there is one I don’t know now though!

I understand that the band has been through legal procedures because of the use of its name a few years back, can you give us the rundown on that?
You’d have to ask Andy and Matt about that man. That was way before my time. All I know now is mortal sin has never been more excited or like minded in what we want for this band. The past is past. Andy and Matt are working great together and share a single goal. The futures all we’re worried about!

What's the situation now days with the Australian metal scene, how big is it now?
There is a metal scene here but its pretty small. Theres a lot of bands here doing it but theres no one backin it up! Sure they can all play the same venues week in week out but that’s as far as they can go! That’s why for most aussie metal bands our market is overseas. Its sucks to think that we have to go there in order to get somewhere but it would seem that’s the only way for it to happen! There is some awesome talent here though dude. Bands like infernal method, the amenta, transcending mortality are all awesome and deserve to make it!

What kind of touring is planned for the band once the album is out?
Non-stop!!! As soon as its done man we’re on the road. Where ever we can go! So hopefully we’ll be seeing u all over there at some point next year.

That's it, any last words for the Israeli Thrash-head?
I've already talked way too much! Haha Seriously though from myself, Matt, Andy, Mick and Nath we wanna thank everyone who hasn’t given up on the sin! We’re coming back and we’re gonna do it well! Metal needs all the support it can get in this MTV, ipod driven world so if we all never forget what we started doing this for it’ll never die!
Cheers man! See ya soon!


Thanks for doing the interview!
Alon Miasnikov
לשתף |
blog comments powered by Disqus