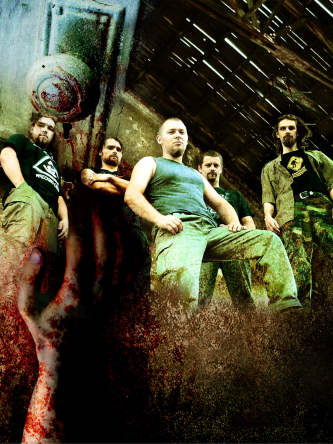 Poland's Horrorscope have been spewing their brand of violent, well-crafted thrash for more than 10 years now, and has released 4 studio albums is of now. The latest – Evoking Demons, drew my attention to the band with its combination of classic melodic thrash with heavier, more contemporary touches. We spoke with the band's guitarist about their latest release, their past and present:


Hey Lech, I'd like to start out with the band's current activities, it's been about a year since Evoking Demons was released, what are you guys doing now?

Hi, at the moment we end our tour this year and, at the same time, we finish writing some new material, so in days we are about to start our late recording session. All our plans have been changed, as we got a lot of invitations to various concerts in 2007. Adding the fact, that each of us also has a normal job, our calendar looked like a patchwork.

When can we expect a new album?

We will start recording very soon, so I think that the final product will be ready in the first quarter of 2008. I know that we said it would be ready earlier but we didn’t want to record something worthless and decided to finish creating new stuff in a very precise way, postponing it in time.


Do you think a new album will be released again by Metal Mind?

MMP had a license of two our former albums in Poland. A the moment, we are not involved in any recording label and just after our recording in studio will be over, we’ll look for a proper company. We will have a corporeal argument – a CD. I think it is possible that another license will be given to MMP – I do not see any objections, but at the moment I cannot say anything sure and precise.

Some questions about Evoking Demons, first, what is the title about? What demons are evoked?

Telling it straight, texts are connected with our anger, frustration and all those odd behaviors, which are inside of us, when we try to act apparently in a normal way, adjusting to the abnormal situation created by our society.

The album's sound is very tight and polished, who produced and engineered it?

It is another common production With ZED Zalewski, we have had a very good co-operation with this producer and we hope to keep it that way. We have recorded together already 2 CDs and now it will be another one.


The album combines both classic thrash elements with more modern touches, how would you describe your music?

It is the most difficult and impossible to describe in a simple way. We play music that we feel and it has always been named as “thrash”, but if you call it something else we wouldn’t mind. All what really counts is the fact that we have receivers and they like what we do. Naming and grouping should help to find a common surface, not diving and making barriers. Yes, we play thrash rooted in Bay Area scene, we call it that way because we were raised on it and we get inspiration from that.

Some of the riffs reminded me of those by Nevermore, were they an influence on you?

I already answered it in the way in the last question, but I really do not know where that comparison with Nevermore comes from. This Seattle team really dominates in the metal top list but they are not our strict pattern. But it is nice that you see similarities to such good bands like Nevermore.

How different, or similar, is the album to your former release, The Crushing Design?

Evoking Demons is the continuation of the road begun on TCD, but is more vulgar and venomous. From the deepest heart I can say both albums are connected with one another and have a logical sequence. All Horrorscope’s CDs recorded earlier than TCD are much less mature and to tell you the truth, beginning with TCD we play really the way we want to. 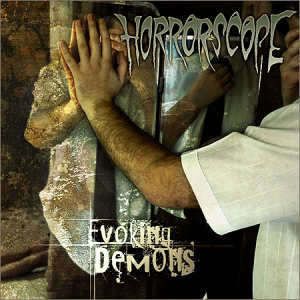 The cover artwork is excellent, who did it and what is the idea behind it?

It’s very nice that you pay attention to the front cover. That’s true, I really think that it suits to the music and lyrics of the album. The idea of the cover is created by Qras (mentalporn.pl). It is another person (next to Zed) who is inseparably close to Horrorscope team.

Your name, of course, bring to mind the great album by Overkill, were you named after it?

Yes, of course the name is connected with Overkill and it is done on purpose. Maybe if we started today, the band would have some other name, but now after 10 years of our activity it has its load of experience and has a historical meaning for us. We think that it is easy to recognize for each metal-freak and brings proper stylistic association.

I read you started as Dissonance, why was that band put to rest, and what led to the formation of Horrorscope?


Dissonance stopped functioning without any certain reason, it had no success and no failure, I guess it was a question of lack of self-confidence. Beginnings are always strange – I don’t want to say – difficult but it is a far element of the history… We stopped playing and meeting without any reason but we had recorded demo which was something big for that time. That is why I couldn’t let wasting this hard work and we re-created some part of material as Horrorscope.

I understand you also have a second band, Black From The Pit, what can you tell us about them?

Black From The Pit is not a regular band but project which lasts in a deep state of hibernation. When the appropriate moment comes, we will hit again. We met with some friends from other bands and we recorded rooting, almost stoner metal. As it is in life, a thing that was to be made occasionally, appeared to be a very good choice, fans liked this music very much, to our surprise. Now, BFTP does not function, everybody has work to do in our own bands. BFTP is a steppingstone for me, as 90% of my engagement, that’s why BFTP is waiting for the moment when I have a lot of cumulated unused energy.

The Polish metal scene is mostly known for its death metal bands, how strong is thrash metal over there?

There is a couple of good Polish thrash teams but unfortunately they are known only local. Thrash scene in Poland is a little but strongly consolidated team, not as powerful as Bay Area one day, but we mostly know each other, meet at the concerts and take part in various projects. Bu the fact is, most of Polish metal bands play death metal.

Your label, metal Mind, has been a leading force in metal in Poland, what do you think about it, and why did you sign in it?

You know, as I mentioned before MMP is not our label, we are not involved in any contract. It is one of the biggest label in our country but not the only one – not far away from them is Mystic Production and several smaller but strong companies. Horrorscope appeared twice as a licensed product of MMP but we signed papers with our German publisher – Shark Records.

How strong has the band been outside of Poland since the last album came out?

It happened several times to play abroad, now we are preparing to the performance in the USA, people want us in different parts of the world and it is a great satisfaction for us. We keep on trying and won’t let go. It is much better now than during TCD promotion. Both our last CDs helped us to be recognizable in the world. Thanks to the Shark Records we had an opportunity to publish our 2 CDs in Japan and we wait what will happen now….


The Polish metal scene is known for having quite a large number of fascistic and racist bands, why do you think there's a tendency for that in Poland?

They are whipsters who really do not know what to do with their free time. It is a waste of time and words to talk about such rubbish. The strongest weapon for them is ignorance. Such people will never play with us on one stage.


Thrash has been going in several directions these last few years, more traditional, and heavier, closer to death metal, with bands such as The Haunted, which one are you closer to?

It is a good question because I am personally impressed by the evolution of thrash which has been made by such bands like The Haunted, Lamb of God and Hatesphere. The new breathe of freshness forced such veterans like Exodus to make some new and unexpected musical solutions. I think that those bands are great and musically valuable.

Finally, any message to the Horrorscope and thrash fans out there?

Wait for the forthcoming Horrorscope album, we will hit again soon
Thanks for an interview – thrash on

Thank you for your time,
Alon Miasnikov
לשתף |
blog comments powered by Disqus