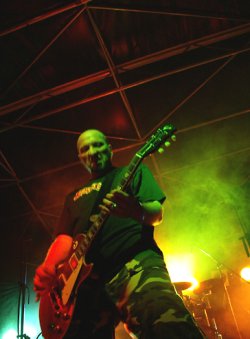 Switzerland's Gurd were born from the ashes of classic thrash merchants Poltergeist by the band's ex-guitarist, V.O Pulver. After Poltergeist's demise in 1994 Pulver founded Gurd, whose expertise was in more groove-oriented thrash, the band's seventh album – "Bang!" Has just been released on Dockyard1 Records, and we spoke with Pulver about his past and current exploits:

Hey man, let's start with current events, is the band working on new material?
We just released a new record called ‘BANG!’ through Dockyard 1 Records. Beside this, we also have some new material, but nothing really finished yet. First we have to play the new songs as much as possible...

What were the reasons for releasing the live album and DVD?
The main reason was certainly the anniversary of our 10 years of existence, hence the name "10 years of addiction". We just wanted to close the first decade with this live CD/DVD package and give the fans the possibility, to enjoy a GURD-Show in their living room!

How did things go for the band since signing with Diehard Music?
After the release of "Encounter" Diehard told us, they don't want to release new albums anymore & they want to focus on selling licences of records they already have. So we moved on & found a new label with Dockyard 1 from Hamburg/Germany. They have a big rooster with bands like Waltari, Shelter, Iron Savior or Mystic Circle & are very enthusiastic in doing a good job & having a good distribution.

How does your new material sound in comparison with older stuff?
I would say the new stuff is something like a combination of all our previous records added with a good portion of 80ies Thrash. You could describe this maybe as ‘Groove-Thrash’ … We still have our catchy groove-oriented songs, but we also let some of my roots (Poltergeist) shine through.

I understand you've built your own studio, how does the recording process work now, compared to the one you had when recording in other studios?
It's way more relaxed… ;-) Since we have a lot more time, we could, especially with this new record, try out more different things, like melodic vocal parts, or solos etc… we even used some choir-samples in the track "The Storm". The only problem is, the studio is getting booked more and more by other bands & we have to squeeze our stuff in the free time, because we also need to earn some money with it…but it's a big step forward for us, to be able to record the records on our own & so we are free to do albums whenever we want… 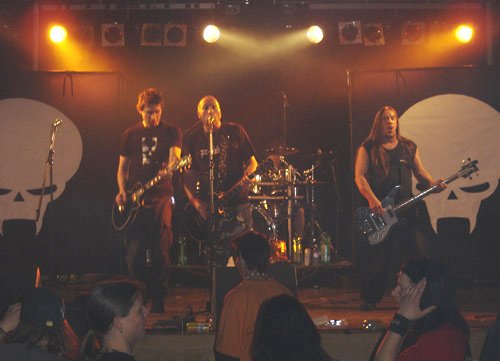 Some history, How did you originally start out playing with Poltergeist?
I founded Poltergeist in 1987 out of my old band Carrion. I was the singer & guitarplayer there and was sick of doing both, so we found André Grieder (who later sang on Destruction's "Cracked Brain" record) and decided to rename the band into Poltergeist. In ’89 we signed a deal with then newfounded label Century Media & released our first album "Depression". After 3 records & some small tours, we decided to split up and I formed GURD, to once again take over the microphone…

What do your remember from Thrash's glory days back in the 80's and early 90's?
Hmm…a lot of memories from back then... I still remember the time in my local record store, when I first checked out Metallica’s "Kill ‘em All" and asked the guy at the turntable, if this is running on 45 instead of 33, because it was soooo fast.. ;-)
Back then, we used to help our friends from Destruction as roadies. We were with them at the Dynamo Open Air in ’86 & Testament were also playing their first show in Europe back then. I was a big fan of them and when I heard they had no crew with them, I happily offered them to help out. That was really great, seeing and working with two of my favourite Thrash Titans!
Back then, there were so many great bands around, just think of Exodus, Forbidden or Heathen … guitarplaying was never again at such a high level… Later on, we played with lots of great bands from that period: Destruction, Kreator, Coroner, Sodom, Tankard, Watchtower, Hades …

Why did Poltergeist break-up & How and why did you decide on forming Gurd?
After the last tour together with Coroner in ‘93, we couldn't go on anymore...
We had no real deal anymore (a friend of us started a label for our third record "Nothing Lasts Forever" and lost a lot of money...) and there were some problems within the band, the rest of the band didn't want to go on with André on the vocals, so they left. I was sick and tired of searching new members and we really didn’t have any big success, so I decided to start something new and the other guys joined me again. We wanted also to implement other things than Thrash into our music and started to mix the Thrash riffs with more groovy & heavy beats. That’s when GURD was born and after we did a demo, we found a deal with Major Records from Germany. After 2 Records with them, we went back to Century Media.

How did you take up the vocalist position on Gurd?
Like I wrote before, I used to sing in my first band Carrion. After the split, we first wanted to look for a singer, but during the first rehearsals, I started to sing my ideas to show them how the songs were meant and the guys convinced me to keep the vocal dutys…

What is the meaning of "Gurd"?
Just read it backwards…. Music is like a druG to us….

Your musical style changed when forming Gurd, why is that?
After 3 albums full of speed with Poltergeist, we had the urge to try something different. We listen to a lot of different kinds of music and I think it should be allowed to mix whatever somebody likes... in fact, there are only two kinds of music… the one you like & the one you don’t like… all this labeling & categorization of music has way overborded in my opinion.

What kind of metal scene is there now in Switzerland?
There is a small scene here, but like everywhere, it’s split up in lots of different sub-styles. There’s a deathmetal scene, a gothic scene, a black metal scene etc.. Unfortunately no real Thrash scene.. ;-))
But we have a lot of great bands for such a small country. We have/had the ‘big’ bands like Krokus, Gotthard, Celtic Frost, Coroner and tons of great newcomers/smaller bands like Pigskin, Vale Tudo, Requiem, Disparaged , Undergod, Darkmoon, Second Function. Through my studiowork, I can see that there are really many new good bands around!

I understand that Gurd is not your only band, where else do you play?
I have also a band together with my wife Inga and our bass-player Franky. The band is called Pulver & my wife is singing. The music is like a mix between Black Sabbath & Pantera with a heavy, dark female voice. Check out www.pulver.net or www.myspace.com/pulvermusic . I also play in a Rose Tattoo coverband called Angry Devils, when I have the time...great fun!

What are your touring plans now?
I am in contact with Gary Meskil from Pro Pain regarding a European Tour in early ’07. Besides this, we just book as many shows as possible. Because there’s also the studio & of course my family (I have 2 kids) which need a lot of time... ;-))

That's it, thanks alot for doing this interview! I wish you all the best!
Alon Miasnikov
לשתף |
blog comments powered by Disqus